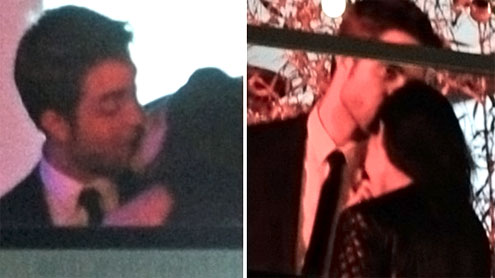 Robert Pattinson and Kristen Stewart have finally confirmed they’re back together properly… but not with a hoary old press statement, but rather…a kiss!

The vampiric lovers were spotted canoodling by 22-year-old Kristen’s pool at her new Los Feliz mansion on Wednesday; which as we reported, is just a stone’s throw about from Rob’s nest.They could be seen laughing and cuddling each other before and after Kristen changed into a bikini and enjoyed a dip in her new blue lagoon.In the pictures Robert, 26, looks particularly content and happy; it’s the clearest sign yet that he’s forgiven his partner for three years for her transgression with married director, Rupert Sanders.

You see all the exclusive images on PopSugar.In one picture, Rob can be seen holding a mug and beaming like crazy at Kristen, who is wearing her bikini top and looks sodden from the pool.To say he’s pleased to see her would be an understatement, Rob has the look of man fixing a gaze upon the very apple of his eye.In other pictures, Rob has given his snap-back cap to his girlfriend, who also wears it backwards… just like her man.

With Kristen in the cap, they can be seen kissing; both partner leaning in as much as the other in that rarest example of perfectly symmetrical body language.In another they are pictured with their arms locked around each other from behind, not even a sliver of daylight has a chance of getting between the pair, they are literally inseparable.Another particularly sweet shot has Rob waving his hands in the air as he animatedly speaks to his former live-in partner, perhaps recounting an anecdote.

And animal lovers who delight in a happy tail will be pleased to know that the couple’s dog, Bear, is contentedly patting around their feet.As we reported, the rescue hound was almost the subject of a tug-of-war between the pair in the wake of the cheating scandal and now it appears he’s got his mum and dad back together. Later, the pair were joined by friends, who also brought a pup along; canine champion Pattinson obviously approved of as he fussed over the sandy coloured beauty.But despite the guests, Kristen and Rob only really had eyes for each other and the set of photographs show them constantly sharing secret and smiles.

At one point Kristen stands with her arm propped possessively on Robert’s shoulder; it’s a confident sign that signals she knows she has him back for good.But it is Pattinson who looks to be most delighted.He constantly looks at Kristen as though he can’t quite believe she’s there, but is dizzy with love that she is.Stewart’s countenance is, as always, harder to read… but she is smiling more than we’re used to seeing, that lugubrious glower understandably diminished on a bright sunny day with the one she loved… and almost lost.

The pair were spotted back together at Ye Olde Rustic Inn in Los Feliz over the weekend.It was a similar scene, according to onlookers as Rob and Kristen cuddled outside the bar and nattered with friends before leaving together for the night.On Saturday night they were at Hollywood’s legendary Chateau Marmont.Two separate witnesses saw the couple at the nightspot, with one telling UsWeekly they ‘snuck into the garden from a private side entrance’.

A second onlooker said Robert was wearing a baseball cap and both were casually dressed in jeans and T-shirts and ‘whispering very close and intimately’.The next big landmark will be the couple’s first official appearance and with press for Breaking Dawn 2 starting next week, that’s an imminent development.The pair will both be on the red carpet at the big LA premiere on November 12, and are expected to attend all foreign premieres together, too.

Pictures emerged today of Sanders, 41, and his estranged wife Liberty Ross, 34, hugging after leaving a counselling session, also in Los Angeles.Both reconciliations (however tentative in Rupert’s case) come months after compromising photos of Rupert and Kristen surfaced in July.Photos of the pair published by Us Weekly prompted both parties to issue a public apology to their respective partners, Liberty, and Kristen’s longtime boyfriend, Twilight co-star Robert Pattinson.’I am utterly distraught about the pain I have caused my family.

‘My beautiful wife and heavenly children are all I have in this world. I love them with all my heart. I am praying that we can get through this together,’ Rupert said in a statement.Earlier on Thursday, Kristen Stewart appeared a live chat to promote the new Balenciaga fragrance Florabotanica.“’I like the smell of the fragrance,’ Kristen said of being a spokeswoman. ‘So I don’t have to lie about that, and that’s great.’

‘It’s natural, which is really important. I just feel like it doesn’t smell like a chemical. That is so important to me,’ Kristen added.’When I wear it I feel older, I feel mature. I feel a little bit more there… at the same time I think it’s very youthful,’ she added during the 15 minute chat that was slated to last an hour. – Dailymail