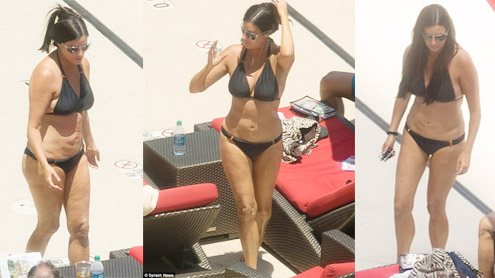 She was wearing a stylish navy blue gown to attend her pal NeNe Leakes’s wedding that day.But before getting glamorous for the big day,  Millionaire Matchmaker Patti Stanger was working on her tan.

The 52-year-old wore a black bikini as she soaked up the sun rays in Atlanta alongside her boyfriend David Krause.The pair were hanging by the hotel pool and Patti was seen fixing her hair as she chatted to her beau who was reclining on a sun lounger.Confident Patti was showing off her trimmer figure after recently losing some excess weight.Over the past two years, she’s dropped nearly 30lbs using weight loss system Sensa.

She now represents the brand as a spokesperson along with The Help actress Octavia Spencer and former Extra host Dayna Devon.Though Patti has had quite a bit of success setting up her wealthy clients, she herself remained unlucky in love until meeting mortgage broker David Krause, 44, on dating website PlentyofFish.com in March of 2012.She told In Touch of her boyfriend: ‘He’s the man in the relationship. I’ve never had that before. I need that. I call the shots all day at work and I’m exhausted.

‘We’re different. But we have real big chemistry and great sex — and that’s important!’I followed my book, Become Your Own Matchmaker. I did everything I wrote in there. I’m shocked it worked, to be honest with you. It works for other people, but for me, I didn’t know it would!’The couple were in Atlanta to watch NeNe , 45, marry her ex-husband Gregg Leakes, 58, in a lavish ceremony at the InterContinental Buckhead Atlanta hotel.The wedding event was captured by a Bravo camera crew and will be seen in NeNe’s spin-off series I Dream Of NeNe: The Wedding later this year.There were plenty of Bravo personalities on hand to add a touch of star power to the occasion.

NeNe’s Atlanta co-stars Cynthia Bailey and Phaedra Parks attended, along with their respective partners Peter Thomas and Apollo Nida.Kandi Burruss and Porsha Stewart were said to have been in the crowd, although they were not pictured at the event. Sources say Kenya Moore did not attend.But a surprise inclusion on the guest list was Nene’s former co-star and nemesis Kim Zolciak. After years of bitter feuding on the show, it seems the pair have finally made peace. Kim, who is said to be expecting her fifth child, was joined by her husband Kroy Biermann.

The crowd also included various women from the other Housweives franchise, including Orange County star Gretchen Rossi and her fiance Slade Smiley, Marysol Patton from Miami and Jill Zarin, who previously starred in the New York series.Nene’s nine bridesmaids included Cynthia, Marlo Hampton, Basketball Wives LA star Laura Govan, Basketball Wives Miami star Jennifer Williams and her best friend Diana Gowins.’I chose each of these ladies for different reasons but the main reason was that they have stood by me, supported me and, at times, they have been a shoulder on,’ she told guests.

‘We have shared some of the most charitable memories together! I call each of these ladies my friend!’More than 400 guests watched on as Nene walked down the aisle in a white Gabrielle Arango gown escorted by sons Bryson Bryant and Brentt to Whitney Houston‘s I Believe in You and Me. Judge Gregg Mathis officiated the proceedings.’We couldn’t be happier,’ NeNe told Life & Style. ‘Marrying my soulmate is the best feeling I’ve ever had.’Once the vows were exchanged, NeNe and Gregg celebrated with their guests in the Windsor Ballroom for what turned out to be five fun hours of partying. – DailyMail