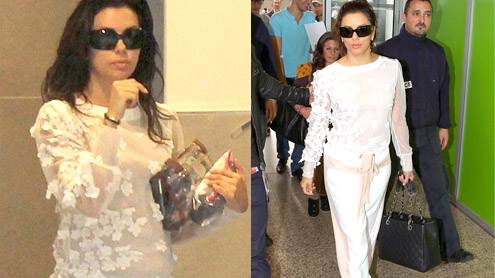 You can’t get much more glamorous than the Cannes Film Festival. And Eva Longoria made sure to make an impact on Thursday as she arrived at the Nice airport for the festivities.

The 38-year-old actress quickly changed costumes as she transformed from comfy traveller to glamorous movie star in one fell swoop in the arrivals terminal.The metamorphosis was apparently achieved without the aid of a telephone booth, but did require the assistance of an employee who handed off her wardrobe change.The delivery occurred shortly after the star disembarked from her plane wearing casual flip flops and black yoga leggings with a sheer top embroidered with white flowers.

But faster than a speeding bullet the actress soon slipped into a pair of cream and beige trousers   with tasteful brown pumps. The trousers featured a beige sash that tied loosely around the waist, nicely complimenting the exotic cut of the slouchy garment.Eva kept the frilly top for her second ensemble of the day.But the diaphanous blouse was much more flattering when paired with her creamy pants and asymmetrical sash.Completing her getup were a pair of chunky sunglasses and a black leather bag.

Despite her obvious rush to attend the iconic film festival, the busy actress still made time for her fans.Brandishing a winning smile, Eva signed autographs and posed for snaps with her admirers before heading to Cannes.Earlier in the day, the actress tweeted: ‘On my way to Cannes Film festival! Heard its rainy and cold there too? Ugh!’

But her spirits were clearly lifted once she landed in the coastal city.Upon her arrival Eva excitedly tweeted a greeting: ‘Hello Cannes!!!!’ Meanwhile, the actress is currently shooting a drama with Michael Peña and Ed Harris.The tense plot centres on a Sheriff in the U.S., who tries to track down an illegal alien involved with a robbery that killed his wife.The movie is slated for release in 2014. – DailyMail