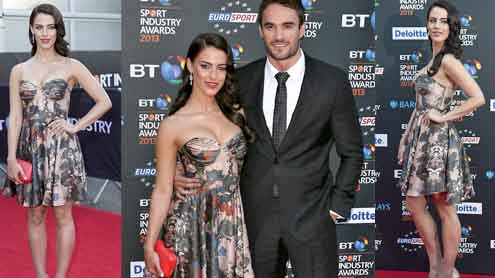 They’ve been quietly dating since February after falling for each other in Los Angeles.However, with Thom Evans bringing his new girlfriend Jessica Lowndes home to the UK to meet his parents, they’re clearly taking their new romance up a gear.

So it was only a matter of time before they made their red carpet debut – at the BT Sport Industry Awards in London on Thursday night.The Canadian 90210 star showed off her cleavage in a low-cut pink floral mini dress as she joined her dapper model at the Battersea Evolution venue.The couple joined a host of stars from the sporting world, including Dame Kelly Holmes, Victoria Pendleton and Amy Williams.

Jessica, 24, and Thom, 28, are believed to have started dating in February, soon after the former Glasgow Warriors player moved to Los Angeles.He relocated to the United States to focus on his acting career following his split from Kelly Brook, 33, in January after two years together.Although Kelly insisted there was ‘no third party involved’ in her decision to dump Thom, she has been inseparable from ex-boyfriend Danny Cipriani, 25.

Forming somewhat of a love square, Danny was said to have had a brief fling with Jessica in June 2010 – a few months after he split from Kelly.Rather awkwardly, Thom and Danny were team-mates in the London Wasps from 2004-2006.Meanwhile, Jessica herself recently parted ways from Olympic skier Jeremy Bloom after a one-year bi-coastal romance.Meanwhile, Olympic gold medallist Victoria showed off her toned figure in a black lace dress, while Sky Sports presenter Georgie Thompson looked summery in a white bandeau dress. – DailyMail