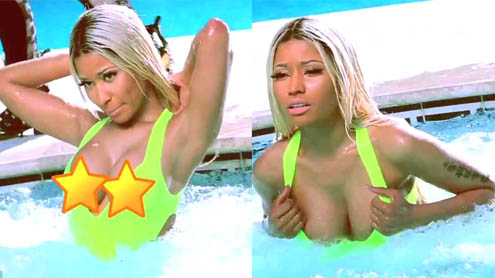 From time to time the combination of her dangerous curves and ever skimpy outfits results in Nicki Minaj revealing more than she bargained for.

And that was the case yet again for the singer as she exposed herself in behind-the-scenes footage from her new music video.The provocative singer hopped into a jacuzzi to film segments for the video for High School, her latest track, which is a collaborative effort with Lil Wayne.Dressed in a plunging lime green one-piece, it’s little surprise that Nicki suffered a wardrobe malfunction.She seemed insouciant as she spilled out of the daring one-piece while splashing around in front of the camera.

‘This jacuzzi is fun!’ Nicki yells above the bubbles. ‘Get in crew, get in!’Nicki’s diva behaviour is apparent throughout the video, especially during segments where she has a bodyguard carry her around set in his arms.At one point the 30-year-old is ferried across the lawn while draped in a flimsy towel, while at another she sports a tight yellow dress and sky high platform heels.It is not by any means the first time the Superbass star has had a very public nip slip.

She famously flashed the crowd while performing live on Good Morning America in August 2011, dressed in a skimpy crop top.The American Idol judge also accidentally bared her areola during a live broadcast of The Re-Up on BET in November 2012.The High School behind-the-scenes footage also features Lil Wayne, and was shot before he was rushed to hospital after suffering seizures.The rapper has reportedly since left the hospital and while according to TMZ he is still feeling ‘weak’, the star is believed to be recuperating at home. – DailyMail

In Pakistan,peace is nowhere on the horizon