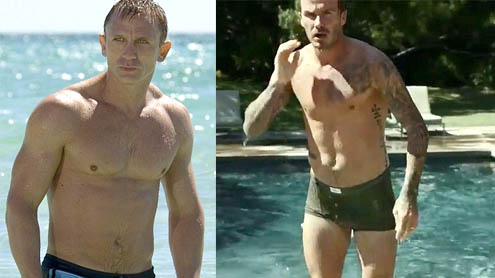 It’s one of the most iconic James Bond scenes, Daniel Craig sauntering out of the water in his pants showing off his muscular physique in his first outing as 007 in Casino Royale.

And now David Beckham has channelled the super spy and mimicked the moment for a new television advert, promoting his new H&M underwear range with the special treat.The footballer just can’t seem to keep his kit on these days.It’s probably a good thing the former England captain will soon be back playing again in France.At least then the new Paris-Saint Germain midfielder will have to keep the shirt on his back.

In Los Angeles – as illustrated in a new video ad for cut-price fashion retailers H&M – Beckham, 37, took every opportunity to show off his heavily tattooed torso.He says in interviews that he’s still shocked looking up to see giant billboards of him in his underwear.But everyone else is getting well used to it.

The latest ad campaign is not the first time that Beckham, who signed a short-term deal last week to play in Paris, has posed in his smalls.The father-of-four first launched his line of undergarments and casual lounge,where costs range from £7.99 to £24.99, wear a year ago with a photo campaign.But this time he gets the opportunity from Madonna’s ex-husband Guy Ritchie, who directed the clip, to try a bit of acting.In the 90-second advert, Beckham is filmed sprinting topless around Beverly Hills trying to save the day in just his pants and slippers after his dressing gown gets caught in the car door as he sees off his children going to school.

After his front door closes behind him he dashes after the car, running across a tennis court, kicking a football and leaping a lawnmower on a short cut through the gardens of the multi-million pound homes.Somehow along the way he loses his vest jumping through some bushes.He dives in a pool and emerges dripping wet in the Bond homage before carrying on with the chase, pausing again only to hitch up his pants when a busload of tourists stop to snap his picture.

If the 37-year-old former LA Galaxy star is hoping the ad will serve as an audition for the big screen, he’s already won over Ritchie, who called him ‘the perfect leading man.’The ‘Sherlock Holmes’ director said he tripled the length of the film from 30 to 90 seconds. ‘For me this felt more than a campaign, it was like directing a short film,’ he said.‘Working with Guy has been a fantastic experience,’ said Beckham, who was coy about a possible acting career.

‘It was good fun playing an action hero for the day, getting to do all the stunts and ending up in unexpected situations, but acting full-time is not something I see myself doing in the near future,’ he added.Fans on Twitter were quick to voice their approval with posts like ‘Hot!’ and ‘Yummy.’But at least one fan was left confused by the ad, tweeting: ‘Since when did Beckham have that much pace?’Although he doesn’t have a personal Twitter account – wife Victoria has more than 5.4 million followers – Beckham took over H&M’s feed yesterday to answer questions.

He turned up late after a training session but posted a photo of him sitting at his laptop and told how London was his favourite city and ‘shaved’ was his preferred hairstyle.Predictably, the former Manchester United star tipped his old club to win the Premier League this season.Beckham, 37, is no stranger to modelling and has starred in campaigns for H&M, Armani and Police sunglasses – most of which have required him to remove his top.

But his latest campaign appears to be among his favourites, with the footballer singing the praises of director Guy Ritchie.Speaking about the RocknRolla director, Beckham said: ‘Working with Guy has been a fantastic experience.’I hope everyone has as much fun watching the film as I had making it.’Director Ritchie seemed equally enamoured, saying: ‘David makes the perfect leading man,’For me this felt more than a campaign – it was like directing a short film.’The film debut coincides with new colours added to the Bodywear range just in time for Valentine’s Day, including red and blue trims, and underwear in utility tones.