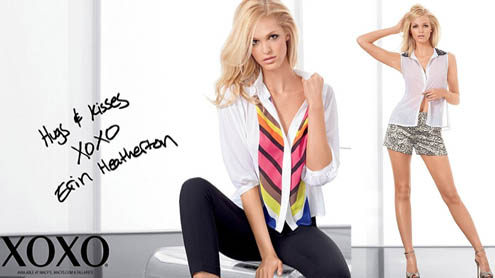 The world is used to seeing her parading her perfectly formed figure in a bikini or underwear as a Victoria’s Secret angel.

But Erin Heatherton’s latest job sees her far more covered up than usual.Still the 23-year-old manages to ooze sex appeal as she poses for a fashion brand Hugs and Kisses XOXO.The blonde steps away from her Victoria’s Secret roots to don women’s wear clothing and accessories for the collection, which is sold in Macy’s and Dillard’s department stores.The star ditches the wings and takes the focus away from her cleavage in clothing which helps to emphasise her legs and other regions.

In one shot the 5’ 11” model wears a pair of tiny printed shorts which she teams with high heels shoes and a see-through sleeveless shirt. While her pins are evidently her asset to be proud of, as she leans up against a wall flaunting them in a graduated hemline floral number and cross her limbs over as she sits in a body contour dress, she reveals her smooth back in a pink cut-out for one advert.

Erin flirts with the camera as she plays with her hair, which remains down for the majority of the shots, only being placed in a bun for one image promoting the brand’s sunglasses.The Illinois-born beauty follows the likes of Miranda Kerr, Alessandro Ambrosio, Tyra Banks and Claudia Schiffer in posing for the label. Although they may not have paraded around in a trendy leather shirt, in the same style as her predecessors Erin lovingly autographs her photographs.Erin – who used to date 38-year-old actor Leonardo DiCaprio – received support from fellow lingerie model Anne Vyatitsyna this week as she tweeted about her friend’s new gig.Erin replied, ‘thank you beauty!!