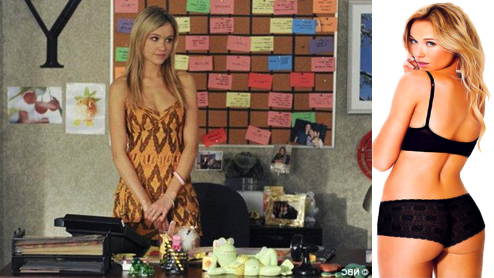 She was an awkward 16-year-old Catholic schoolgirl when she won her role as Cerie on 30 Rock.But seven years later and there is no denying that Katrina Bowden has come a long way.

The actress showed off her womanly figure in a pair of lacy underpants and a bra as she posed on the front cover of Maxim.Katrina, 22, revealed to the magazine that working on the show had been a huge learning curve.’At first I felt like I was in over my head, but everyone made me feel so comfortable,’ she said.’I’d hang out with people from the show and go to SNL tapings and the after-parties, and a lot of the writers were young.

‘Like, Donald Glover wrote for the show before he was on Community, and he’s just a little bit older than me.’But it’s not like I was going crazy and partying, which might have been different if I’d been on a show with lots of young people, like Gossip Girl.’It is the second time Katrina has appeared in the magazine, with her first photoshoot sparking a proposal from her musician boyfriend Ben Jorgensen.’I think he wanted to propose for a while, but that may have made him want to seal the deal,’ she revealed. – DailyMail