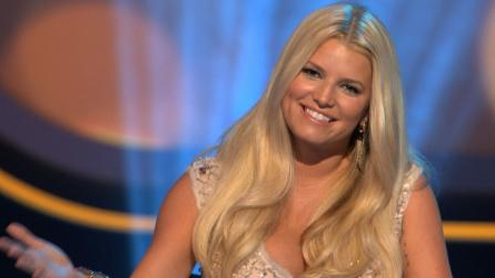 Jessica Simpson gave fans a glimpse of her new pregnancy curves in a candid snap posted on her Twitter page.

The busty 32-year-old, who is holidaying in Hawaii with her family, posed in her hotel room wearing a low-cut kaftan which revealed her red string bikini top.She also put her natural glow on show in full effect by wearing no make-up and completed the beach look with a hat.Of course, Jessica has always been proud of her big bust, which is usually a DD cup.

When rumours surfaced in 2011 that she was planning to get a breast reduction, she immediately took to Twitter to set the record straight.essica, who gave birth to daughter Maxwell on May 1, announced she’s expecting her second child this week and Weight Watchers have since confirmed she has put her diet on hold.But she will remain the face of the company and they will continue to run ads promoting the blonde’s 50lb weight loss, as well as pushing a new commercial in which she announces her pregnancy.

Praising her ‘successful’ weight loss, the company added: ‘Jessica will not be following the programme during the pregnancy while her weight and well-being are monitored by her obstetrician.’Jessica is still in Hawaii after jetting off for a Christmas break with her ex-footballer fiance Eric Johnson and seven-month-old daughter Maxwell.Her extended family – including mother Tina, sister Ashlee Simpson and nephew Bronx – are also holidaying with them.Her father Joe Simpson, who split from Tina earlier this year amid rumours he’s gay, did not attend. – DailyMail

Sharapova and Williams set to be fit for Brisbane

We're a nation of painkiller addicts