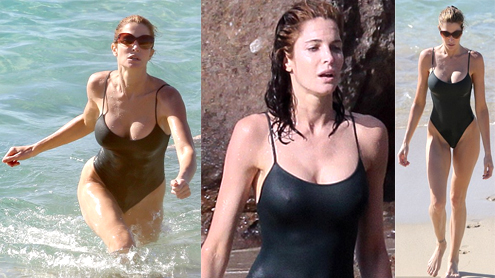 She’s spent the past week parading her incredible bikini body at St. Barts.And Stephanie Seymour gave spectators a glimpse into some of the fitness behind her enviable figure Saline Beach Wednesday.

Easily defying her 44 years, the former Sports Illustrated model was seen both snorkeling and contorting her perfect body into precise Pilates/yoga poses on the sand.The brunette bombshell, wearing a black one-piece with spaghetti straps, is said to employ a high-protein diet and a rigorous exercise regime of Pilates, cardio work, and yoga to stay fit.And as Stephanie seamlessly transitioned from downward facing dog to upward facing dog poses, it’s clear she’s very disciplined with her exercise routines.

Looking like a real-life Bond girl, Seymour appeared make-up free as she carried her snorkel and flippers.Her rock star dating past was faintly evident thanks to the dated nineties tattoo surrounding her right ankle.The five-foot-10 stunner was not alone either, as she was joined by her eight-year-old daughter Lily and 15-year-old son Harry for some fun in the sun.

Not seen Wednesday was the kids’ father and Stephanie’s longtime husband Peter Brant.She and the 65-year-old mogul, who’s worth an estimated $2.7 billion, have homes in Connecticut, the Hamptons, and Manhattan.The couple’s eldest son, openly gay socialite Peter II, was last seen browsing the men’s clothing stores with his famous mother in Gustavia on Sunday.

The flamboyant teen caused a bit of controversy two years ago  in the Caribbean hot-spot for embracing and kissing his bikini-clad mother on the mouth and brushing his hand over her breast.The family released a statement to the press in which Peter said: ‘I would just like to say that these pictures have been taken completely out of context, my mother and I are very close as she is with all her children.”We have nothing to hide and with that in mind I would like to say that I am openly gay,’ he added.

‘At my age my mother and I are almost like friends and I feel open to talk to her about anything (and yes our relationship may be different because of my sexuality).’Earlier this week, Stephanie went for a more revealing outfit in a string bikini, showing off her amazing beach body in the tiny two-piece.She finished off her outfit with a crocheted sarong and carried a pair of cork wedges in one hand as she strolled along the beach with her two youngest children.

Seymour also has 21-year-old son Dylan from her brief marriage to guitarist Tommy Andrews, and Brant has two other children from his previous marriage.The former Victoria’s Secret angel has since graced more than 300 magazine covers and considered the world’s most celebrated swimsuit models. – DailyMail