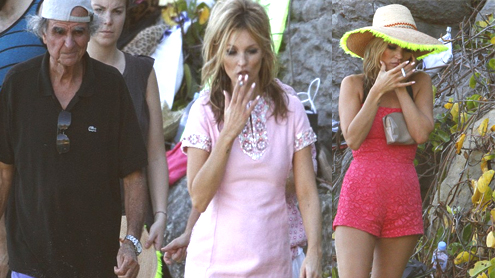 She’s been living it up in the Caribbean over the last few days under the pretence she’s there for work.

But it seems Kate Moss is having a whale of a time as she continues her break in St Barts with husband Jamie Hince.The supermodel took to the beach in a number of scantily clad ensembles this week for a new glamorous photo shoot as part of her job as world renowned catwalk star.While posing came naturally to her, Kate couldn’t hide her delight as she cracked up laughing during breaks from being in front of the camera.

And she took the opportunity in between takes to puff on her cigarettes.The 38-year-old was seen smoking while dressed in a tiny strapless playsuit she’d just been posing in.And she showed she’s certainly still got it by flaunting her perfectly toned physique for all to see, even revealing her sandy derriere during another break from the cameras.

Earlier in the day Moss was seen wearing a pair of huge leopard print knickers as she posed for the same photoshoot in St Barts.Kate teamed the Bridget Jones-style pants with a matching bra and a cropped jacket with a floral print.As well as wearing the gigantic Fifties-style knickers Kate was also seen wearing a series of stylish looks during the beach shoot.Kate was seen in a lemon-coloured bra and a high-waisted black skirt, teamed with a leopard print cardigan.

Kate was seen positioning herself on the boulder showing off her lithe frame as she posed for the cameras in St Barts.The Croydon-born model was seen showing off sand-covered limbs as she posed for snaps in the exotic location.The mother-of-one was also seen sporting a pretty pink playsuit which she teamed with a straw hat with neon green embellishment.At one point Kate had enough of being in front of the camera and was seen standing behind it looking through the lens.Kate was being shot by French fashion photographer Patrick Demarchelier.

Earlier in the day Kate was seen wearing just a neon knit and a pair of striped swimming bottoms.Kate was seen racing around the sands and was clearly unperturbed by the lack of clothes. Around her middle she sported a thick leopard print belt, an unusual look for the beach.Kate didn’t stick to roaming across the sands, she also made her way into the water and was seen splashing about in the sea.After all the exertion the style icon was seen stopping for a refreshment and an energy boost.Kate was seen sipping from a cool can of Red Bull before she continued the fashion shoot.

And it seemed that the energy drink really did give her wings as she flew around the beach performing for the camera.Kate has clearly spent plenty of time in the make-up artist’s chair and sported thick eyeliner around her lids and bronzed cheeks too.And as soon as the photo shoot wrapped up she ensured she made the most of her time in the sunny region with husband Jamie Hince, who was, of course, in tow.The pair were seen relaxing by the pool over the weekend, making the most of the good weather.

Both Kate and the musician were seen showing off torsos while catching a few rays outside on the sun terrace.Not only did she have her long lithe limbs on display but Kate was seen pulling her top up to reveal her flat stomach.Jamie also seemed extremely relaxed and appeared to be making the most of the pre-Christmas break.The 43-year-old musician was seen strutting around the pool in a pair of black boxers, before cooling off in the water.The model released her autobiography, a book which documents her modelling career spanning across two decades.The model’s autobiography Kate: The Kate Moss Book lifts the lid on her illustrious career and she talks about the label ‘heroin chic’, saying she never even tried the drug. – Dailymail