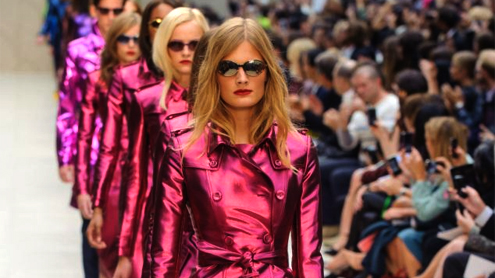 All I want for Christmas is to look like a model. It’s those darn Victoria’s Secrets Angels that did it. I’ve spent the last few weeks being inundated with backstage videos, catwalk clips and lip-synching musical montages of the bare skinned beauties.

It’s enough to make you put down the mince pies and reach for the nearest personal trainer. Lily Aldridge lived off of salmon, you say? Pass the fish.After ten years working in and around the fashion industry, I should know better: I understand all about the legends, the myths and the truth about models. So, in honour of the 12 days of Christmas, and to make myself feel better, here are 12 model secrets.

Eating disorders and pressure to diet are not the only issue. Kate Moss’s recent revelations that she wasn’t fed when she started out came as no great surprise.New faces (freshly signed, unknown models) work long hours, often in cities and countries far away from home, where finding time, money and places still open to buy food can prove tricky.You’re broke, you’re tired, you don’t speak the local language, you’re 15-years -old, and no one thinks to feed you: you’re going to bed hungry.

For each half-starved model I’ve met, I’ve met countless more who happily nosh away. Like the face of a major campaign who showed up four hours late on set and ate all the catering.That’s ten people’s worth of food: more posh sandwiches and artful salads than you could lift. That’s a serious case of the munchies. Must have been a late night.

Take the supermodel that covers everything in Tabasco. Does it add a little flavour to a diet of lettuce? Does she just like spicy food? Is it an amazing waist-whittling trick that speeds your metabolism? I don’t know.But I do know her assistant has to carry a bottle everywhere.

The majority of models are still in their teens. When I was in my teens I could eat Big Mac after Big Mac and it made no difference to my dress size.Teen models are just doing what teens do: eating whatever they like. Oh for the innocence/waistline of youth.

The British Fashion Council has banned models under the age of 16 from appearing at London Fashion week, but they’re not prohibited from working on magazine shoots, ad campaigns, and in all other aspects of the industry.There are plenty of agencies that won’t book under-age girls, and things have certainly got better, but I’ve still witnessed disturbing incidents.Like the 13-year-old girl, being touted as the next big thing, who was asked to pose in her just her pants for a high-end magazine.Then there’s the ‘guardian’ of a 15-year-old Eastern European model, who I saw forcefully grab the girls bottom when he thought no one could see. Got a stunning, 6ft daughter? Leave her in school, or go with her.

You don’t really want to look like a model

How many times have you read that a model wasn’t popular with the boys at school? Tyra Banks, Heidi Klum and Gisele Bundchen are just some of the big names who’ve confessed to being bullied because of their looks.They can’t all be ugly ducklings that grew into swans? The truth is models aren’t that pretty. They’re unique, ethereal, otherworldly, but they are not pretty.Would you really want to walk into a room and have everyone stare at you, because you looked so striking and tall?There would be nowhere to hide. We should pity the beauteous, freaks. Really, we should… I’m still trying.

Not all models are rich

Anyone that’s a household name, makes a big enough splash, hangs onto the catwalk for long enough and starts bringing out merchandise is, it’s probably safe to say, loaded.What people forget about are the hundreds, if not thousands, of unknown girls moving through the industry every day; fighting to get jobs, traipsing round cities, living in cramped dormitory-come-flats owned by agencies.The girls who are told they have four more weeks to make it. Four more weeks till they are sent back to wherever they came from. Even if you can eeek out a reasonable career, you’ll be retired at 22. Depressing.

If you take young girls and drop them straight into an intense adult world, which is full of drugs, alcohol, sex and morally questionable people, bad things will happen. Like the naive 17 year old model who was coerced into performing a sex act on a famous photographer, in front of the whole crew. It makes me want to cry just thinking about it.

Models are not revered

From the outside models appear to be the stars of the show, really they’re just a product, something to be pushed and prodded around.It’s necessary to remind some clients that models are people too. Being famous doesn’t protect you – one supermodel’s agency openly refers to her as “Miss Piggy”, because they think she’s a bit on the chubby side. Way to treat your main moneymaker.

Models can be badly behaved

Take the model that ripped a phone from the wall and threw it at the photographer. Or the model who bitch-slapped another girl on set for looking at her funny.Or the model who flounced out before a show, after a screaming showdown with the designer. Or the model who repeatedly ruined her make up because she disliked the make up artist. Need I go on?

Models can be smart

Many of the top stylists, photographers and agents in the business used to be models.They saw that their marketable beauty had a best-before date and focused on building their contacts.They understand the fashion industry from the inside out, and learned how to capitalise on it. Look at Grace Coddington. Beauty AND brains. Life’s not fair.

Models can be dumb

A very famous face who was on set in a dilapidated house asked to use the toilet. The producer explained there was a toilet, but it didn’t have a door on it. The famous model replied, ‘How do I get in it then?’ – Dailytimes