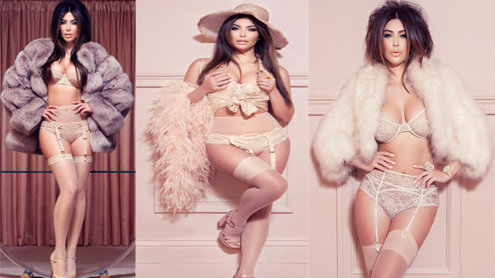 She has modelled several sexy looks during her time in the spotlight.But Kim Kardashian’s latest photo shoot for French magazine Factice could be one of her most daring yet.

The 32-year-old displays her world-famous curves in several boudoir-inspired ensembles.First up Kim raises temperatures in a racy lace bra and panty set complete with suspenders and cream silk stockings.The brunette beauty’s ensemble is topped off with a luxurious-looking fur coat and and giant diamond and enamel floral ring and matching bracelet.With her famous full lips heavily glossed, Kim does her best pout and smouldering stare for the camera.This time instead of wearing her glossy locks down, she has them tousled up in a messy bedhead style.

In another snap, Kim wears her hair down in a somewhat Fifties voluminous style.And the reality star is certainly every inch the pin-up girl in a beige satin lingerie set, this time paired with a darker fur coat and sky-high Christian Louboutin heels.Kim’s shoot also switches to playful, as she changes into a cream sheer set with a sleeveless shirt worn over her top half and tied at the waist.

The Keeping Up With The Kardashian’s star pushes her already ample cleavage together creating even more lift.The coquettish look is completed with a feather boa and a wide-brimmed hat.Kim is not only just standing and posing for her French fashion shoot.She also reclines on a shell-shaped sofa, wearing a vintage white lace basque, matching silk stocking and white heels.She once again drapes her feather boa around her body and gives a smouldering stare into the camera.And for her most sexiest shot of all, and one that is bound to get boyfriend Kanye West’s heart racing, is one of Kim sprawled across a mirrored coffee table.

Jutting out her famous derriere, Kim’s curves look sublime in a sheer cream lace and silk set paired with leopard print stilettos, pearls and yet another fur accoutrement.Launched in February 2011, Factice Magazine is a French, fashion and online (every two months) magazine.It is just one of the many projects which Kim has been working on of late. 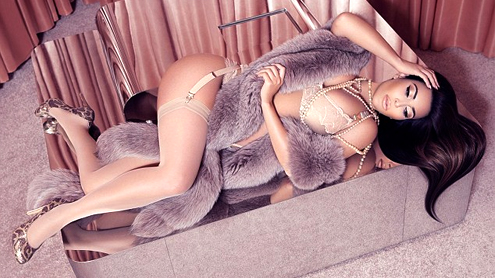 The always busy star has been jetting around the world in the last few months doing photo shoots and promoting her clothing line, as well as being in Miami to shoot her reality TV show Kourtney & Kim Take Miami.However, Kim was recently left devastated after her four-month-old kitten Mercy died.She had received the adorable white Persian kitty from her rapper boyfriend Kanye West last September, but was unable to care for it herself after discovering she was allergic.

‘I had fallen SO in love with Mercy that I wanted to try everything I could to keep her, but I didn’t think it was safe to resort to injections,’ the Keeping Up with the Kardashians star told her 16.7 million followers on Friday.On October 16, Kim passed along the responsibility of the furry feline to her sister Khloe’s assistant Sydney Hitchcock, who had lost her own cat after 17 years.The most famous Kardashian continued: ‘After a couple of weeks Mercy got really sick and Sydney had to rush her to the vet. They discovered she had a stomach problem that we weren’t aware of. Poor little Mercy died the very next day.’

According to E! News, Sydney got a call from her boyfriend saying the feline was ‘limp and not moving’ on November 26, and the next day they had Mercy euthanized.Unfortunately, the fatal, cancer-like virus attacked Mercy’s tiny stomach and Kim was reportedly quick to point the finger at the breeder.’Kim is really upset,’ a source told E! News.

‘She was upset about Mercy dying and upset that she was trying to do something nice for Sydney and then she fell into a situation where [Sydney] had to grieve another kitty. Kim called the breeder and said they should be more responsible.’The globetrotting socialite had always dreamed of owning a kitten and named Mercy after one of West’s songs.’My heart is completely broken,’ Kim said on her official blog.’Mercy was a gentle and loving kitten and we are all going to miss her so much. Thanks to Sydney for making Mercy’s short life one filled with love. RIP Mercy Xo’. – Dailymail