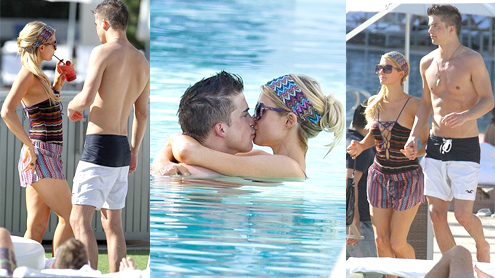 They’re certainly giving other pool-goers something to stare at.Paris Hilton and her 21-year-old boyfriend River Viiperi were smooching and groping up a storm in Miami – and they don’t care who knew it.

The socialite, 31, and her new Spanish model beau, who she is said to have met at New York Fashion Week in September, are enjoying a mini break in the Florida sunshine… and showing off their romance for all to see. The pair were seen kissing in the pool of the Fontainebleau hotel and also cosying up and giggling into each other’s faces.The couple chatted while Paris sipped on a fruity looking drink and they held hands as if they couldn’t bear to be separated.

At one point River nuzzled Paris’ neck and then for whatever reason she bent over and he felt the need to hold on to her waist. Paris kept her beach look retro in a stripey string one-piece and flirty little shorts – with matching headband.She alternated between sweeping her long blonde hair up in a messy bun and wearing it loose.River kept it simple in beach shorts and a baseball cap when he wasn’t in the water.

Paris and her younger sister Nicky, 29, jetted into Miami on Thursday after attending a gala dinner in honour of their parents in New York the night before.The blonde duo were guests at the Economic Scholarship Program Gala Dinner, held at Cipriani’s, which was also attended by fellow heiress Ivanka Trump and her famous father Donald.

Nicky joined the couple at a barbeque party on Thursday and she seemed to approve of her sister’s new man.Again Paris and River, who has modelled for Calvin Klein and Armani Exchange, were said to be all over each other and seemed to deliberately fawn over each other in front of the cameras. – Dailymail