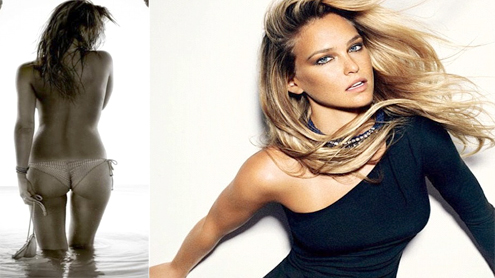 She last shared a candid snap of herself during a painful-looking dental examination.

But Bar Refaeli decided to remind the world why she’s one of the most in-demand bikini models by posting a Twitter picture of herself topless while submerged in water Monday morning, with the caption: ‘Watch your back!In the sexy black & white shot, the 27-year-old stunner can be seen from behind wearing nothing but a checkered string bikini bottom – with visible tan lines – as she coyly holds her triangle top.

However it’s unclear when the cheeky picture was actually taken or whether the Israeli model is in a swimming pool or the ocean.Bar also posted a mysterious picture of herself with five small children, and wrote: ‘Can u think of a better day to start the day?’The five-foot-nine beauty, who recently appeared in a new photo shoot for Spanish Glamour magazine, frequently shares glimpses into her glamorous, jet-setting life with her 363,000 followers.