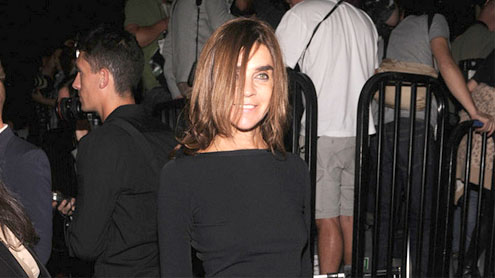 She is being strict about its content as there are some people she has no interest in promoting.’Some people I will invite into my magazine, some people I don’t want them to be in my magazine. Of course! It’s like to have a dinner. I want to be happy of all my guests around the table,’ she told the British edition of Grazia.Many were shocked when Carine resigned from her position at Vogue, as it had been speculated she had her eye on helming the US edition. She is pleased she made the decision as she was at the tome for a decade.

‘When [I left] there was really, ‘My God, now, I’m free! Not [liberation] because I was not in jail. But more… opportunity. I think I am more me now. When I was in Vogue, maybe I have to make me in the uniform of editor-in-chief. I get more blonde. And now I go back to what I was before: more brunette and more direct,’ she said.

Much has been made of the amount some magazines photoshop their images over the last few months. There have been calls to bring in laws banning some changes to photographs, but Carine has hinted she doesn’t approve.’I think, at the end of the day, we will be allowed to do nothing,’ she said. ‘Maybe something it would be good to make illegal, is to fart. There are a lot of people farting and it’s not very nice.’ – MSN