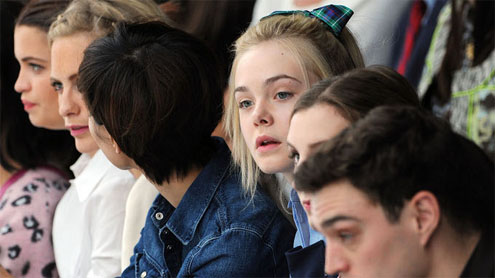 Elle Fanning has gushed about her favourite style idol Alexa Chung for ‘always looking so cute’.

The American actress spoke about her love of the British style icon while attending the Topshop Unique show at London Fashion Week yesterday.Dressed in a school girl chic ensemble of navy blue shift dress, powder blue shirt, knee-high flat black boots and a chequered bow, Elle looked just as a 14-year-old girl should and hinted whose style she had channelled for her appearance.

‘[Alexa] always looks so cute!’ Elle told GraziaDaily. ‘I like how she mixes the tomboy style with the girlie girl rather than just sticking to one look.’The teenage star is currently in the UK filming her movie Maleficent in which Angelina Jolie also stars. The lengthy shoot means Elle has already spent the past three months residing in the country. Elle has enjoyed checking out vintage stores as well as Topshop’s clothing range.

‘[London] has become my second home because I’ve been here for so long. You have great vintage shops,’ Elle continued. ‘Topshop have so many different styles so you can express your individuality by putting all the pieces together, like, you can wear a mannish shirt under a pretty dress. And the store is so big, I can shop in one section for hours!’ – MSN