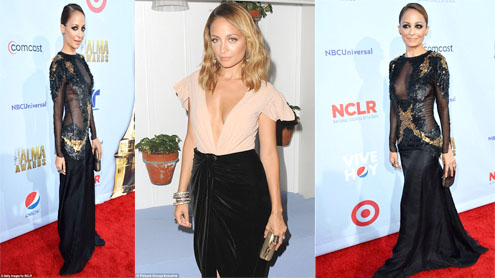 She is often seen wearing an array of boho-style baby doll dresses.But Nicole Richie appears to be vamping it up of late.

For the 30-year-old reality star-turned-fashion-designer stepped out over the last few days in two VERY revealing dresses.This evening at the 2012 NCLR ALMA Awards at Pasadena Civic Auditorium, Nicole went for a sexy take on Gothic as she slipped into a floor-length black gown with sheer panelling at the top.Strategically placed matte black and gold sequinss scattered across her chest and shoulders were the only thing concealing her modesty, and the ensemble featured a long black satin skirt.

The blonde star slicked her hair back into a bun and lashings of black eyeliner completed the look.On Friday night she also chose to show off plenty of her decolletage at the DuJour Magazine premiere party at Mondrian Hotel in West Hollywood.The mother-of-two this time opted for a Maria Lucia Hohan designed two-toned ensemble, which feature a plunging pastel pink top and a black velvet skirt with large slit up the front.She completed the look with some snakeskin high heels and a clutch bag from her own line House of Harlow 1960, and wore her hair out in a natural wave.The fashion designer was joined by the evening’s host, DuJour Media’s Jason Binn.

Nicole appears on the cover of the magazine which will be released on September 19.The former reality star is currently making waves in the fashion world and recently launched a line for Macy’s.Earlier this week she appeared on the Good Morning America show to plug her Macy’s Impulse line.She chatted on the show about how she always wanted to be in the industry.

The star said: ‘Being in fashion is something that I have been dreaming about my whole life. I started out with jewellery because it was a smaller project and it’s closest to my heart.‘And I knew that once I got into ready-to-wear that it would take up my entire life. Once I decided that it was time, I went full force into it and I’m just slowly expanding and enjoying every minute.’

But Nicole admitted that she does struggle with balancing life as a working mother-of-two.She said: ‘I just have to wake up every morning and kind of prioritize and figure out what I need to focus on for the day. It’s a constant juggling act and it’s just what you have to do.’ – Dailymail