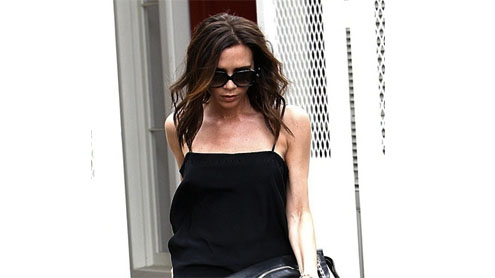 Victoria Beckham is reportedly planning to ‘ease up’ on her diet.The fashion designer is renowned for her slim frame, with recent reports suggesting she was going on the baby food diet to help her shed more weight.

It seems the speculation was premature, as after seeing pictures of herself looking petite the star has now decided to beef up.’She’s not going to gain 14lbs. or anything, but Victoria knows the strict control needs to ease up a bit,’ a source told Heat magazine.The star has admitted she struggles to maintain her weight because she is so busy. Looking after four children, including a baby, and creating her fashion collections takes its toll.

‘It wasn’t a huge surprise that she’d dropped weight recently, as she’d also upped her exercise, regularly working out twice a day,’ the insider said. ‘Victoria does thrive on her thin body and she uses it when she’s working, to plan designs around. But, having lost several pounds in the last three weeks, she has now admitted that she wants to become a bit curvier.’ – MSN