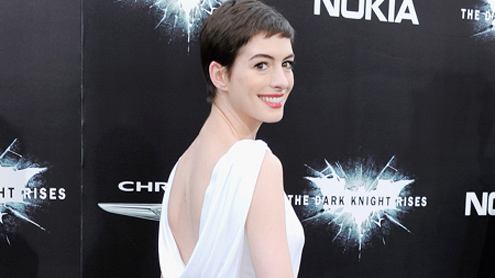 Anne Hathaway looked a vision in white at the New York City premiere of The Dark Knight Rises yesterday.

The stunning star – who plays Catwoman in the iconic film franchise – wowed the crowds in a plunging Grecian-style gown which showed off her décolletage for a sexy twist on the otherwise angelic ensemble. The gown boasted jewelled detailing on the bust and an on-trend peplum detailing just below, while it also featured a draped back and a flowing train. Anne let the detailed dress do the talking and opted for minimal accessories, choosing a delicate diamond bracelet to set off the gown perfectly. The gorgeous actress wore her newly cropped pixie do in a soft-sweeping style, and her make-up was natural except for a slick of vampy red lipstick.

Meanwhile, co-star Marion Cotillard opted for a show stopping cream-coloured mini dress, complete with a ruffled skirt and embellished bodice. The thigh-skimming frock showed off Marion’s pins to perfection, and she teamed the ensemble with gorgeously embellished silver sandals. The brunette beauty – who stars as Miranda Tate in the hotly-anticipated movie – wore her locks in a casually chic up do.  The 36-year-old teamed the elegant hairstyle with metallic gold eyeshadow and nude lips.

The male stars of The Dark Knight Rises were also in attendance on the red carpet – with Christian Bale looking suave in a classic black three-piece suit. The actor – who plays Batman in the film – arrived with wife Sibi Bla?i?, who looked elegant in a figure-hugging black dress.  Gary Oldman wore an offbeat ensemble, which included a brown suit teamed with a blue shirt and striped tie.-MSN