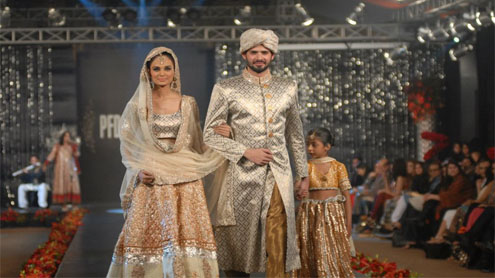 LAHORE: Fashion designer Nida Azwer held a solo exhibition at the PFDC Mall One on Tuesday, where she displayed her latest prêt a porter collection along with a complete Haute Couture collection.

Committed to make a good first impression on the citizens of Lahore, Nida displayed a varied range of ensembles in her first-ever exhibition. The dresses in display included eastern wear accentuated with signature and vintage design elements along with fashion pieces from ‘Awadh Court Collection’ and ‘Parinda’, both of which had gained much acclaim at the PFDC L’Oreal Paris Bridal Week and Showcase 2012, respectively.

Everything made under the Nida Azwer label is handmade with use of pure fabrics, including Irish linen, chiffons, handwoven silks and brocade.Talking to Daily Times, Nida said, “While my team and I have brought the Nida Azwer fashion label to the ramp in Lahore several times as part of bridal and prêt fashion weeks, this, however, is the first time we are bringing the entire Nida Azwer fashion range for retail in one space and that too on popular demand. Indeed our regular shows have propelled the label in Lahore and such an exhibition is a result of the consistency of the brand’s exposure in the city.”

After graduating from the Indus School of Art and Architecture in 2005, Nida immediately started work on her eponymous label. She was nominated for the coveted Lux Style Award for Best Emerging Talent in 2008 and won the Best Designer Award at the Nesvita Women Of Strength Awards in 2009. – Dailytimes

In the right direction