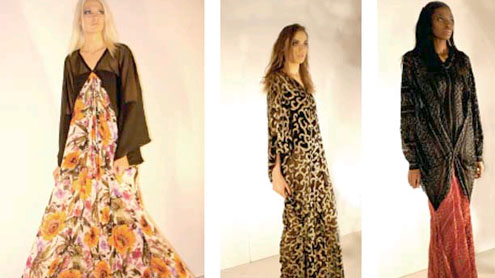 She came, saw and conquered, and then put the haute couture world on notice that black is sensuous, feminine and universal.

Rubbing shoulders with high-profile fashion gurus and socialites, and walking down the ramp in humility in London this week, was Emirati designer Sumayyah Al Suwaidi, owner of Abu Dhabi-based Grafika Boutique.She is the latest in the line of Emiratis who brim with the passion to excel and stand at the threshold of international acclaim. In fact, Sumayyah is only the third Emirati to debut at London Fashion Week, after homegrown labels DSA
Collection and Bint Thani who showcased their creations in the bi-annual event in the last season.

The show was organised by La Geneve North Events alongside the London Fashion Week, with the sole aim of introducing outstanding emerging and independent designers to an audience of buyers and fashion professionals.Talking to City Times from London, Sumayyah said the show has left her high on emotion. “The feeling was phenomenal,” she said.“I am so proud to present my culture to the West and to a crowd who has never seen the abaya with this concept of being luxury, sheer, chic and very feminine.”

The owner of the fashion line for women said she was able to make a bold statement that the black Arabic attire is, in fact, made for every woman to wear on special occasions. “The woman does not have to be a Muslim or an Arab to wear it,” she added.Sumayyah draped her models in abayas of different hems, fabrics and designs, some of which would have raised a few eyebrows locally.“They were abayas made of chiffon, mixed materials and see-through embroidered fabrics, very luxurious and sophisticated with a Western twist.”

Did furs fly when models in swimsuit strutted down the catwalk in flowing black abaya, believed by some as a symbol of conservatism?“Some of my models did not wear voluminous dresses underneath, instead I had them wear a sleeveless one-piece swimsuit so the viewer could concentrate on and appreciate the abaya, and not what’s worn underneath.

“This way the viewers would know that they can wear anything they like underneath — even a pair of leggings and tube top,” she added.How did London receive her collection labelled Seen? “People loved the collection and I received great and positive feedback.”She said though she was able to announce to the world the arrival of the Emiratis on the haute couture scene, the fashionistas “were more concerned about the creation than where I was
from”.“Yes, people were definitely impressed by the collection as they hadn’t seen abayas from this perspective, especially from an Emirati,” Sumayyah said.

Does she expect her work to find purchase at the show? “I was approached by some buyers and hopefully we will collaborate on collections for the London market.”Inspired by the London experience, Sumayyah is determined to go places. “My plan is to show either in Paris or in the US in the next fashion season at the end of the year.”“My ambition is to see the homegrown label Seen grow as an international brand which is accessible to as many people as possible.”

In the long term, she would love to open Grafika outlets in London and Paris.Talking about her most memorable experience at London Fashion Week, the young Emirati said: “When I was on the ramp, people were all smiles and clapping, I could read their lips – that they truly enjoyed my collection.”According to estimates, Britain’s weeklong fashion festivities, which features over 100 shows, could generate orders in the region of 100 million pounds ($160 million). – Khaleejnews