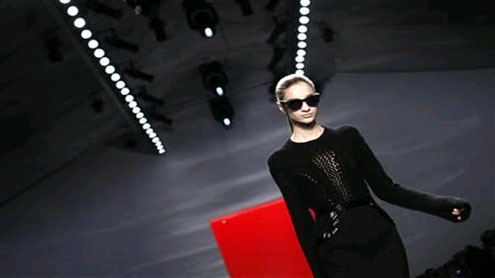 Dresses in rich hues of cobalt, emerald and ruby featured heavily and marched alongside military-inspired coats with fur detailing for a fashion week keen to burnish its reputation for young creativity.”It’s become a really, really exciting place to be. Especially in the last five years. People are realising that there’s a lot of businesses here that are very scalable,” British designer Alice Temperley told Reuters.

Temperley, whose collection was inspired by Renaissance paintings, sent her models out in huge fluffy fur hats, brightly coloured printed dresses with oriental flower patterns and delicate sheer evening gowns with rich beaded detailing and embroidery that oozed decadence and the glamour of past eras.Dressed in a deep blue navy lace jacket and skirt, the designer said she wanted to have fun creating something that was new, current and sensual with something that was rich and opulent. She added that attention she had received from Kate Middleton and her younger sister Pippa had boosted her label.

“They’re great British ambassadors and we’re a British brand. It can only be a good, healthy thing,” she said.At Issa London, models wore vibrant printed dresses and colourful evening gowns of deep rich hues. Subtle embellishments of beading, fur hats and a Chinese red lace piece drew approval from the crowd.Actress Gemma Atherton, musician Tinie Tempah and American DJ and model Leigh Lezark graced the front row of Issa, another favourite of the Duchess of Cambridge, as models sashayed past with fur hats or printed scarves neatly tied about their necks.

London is also gaining a sharp sense of business acumen that has helped its reputation grow commercially.”As businesses, we deliver on time, we deliver really good products and there’s more of those scalable businesses than there were before,” Temperley said.”It’s not just about the new generation, there are people coming through that are obviously very creative and very inspiring and what London is renowned for, but it’s also about people who have good businesses that can and do sell globally.” – Yahoonews