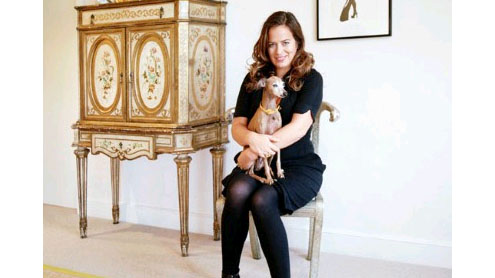 The 40-year-old designer and the daughter of Bianca and Mick Jagger talks to Sophie de Rosee about her daily routine, favourite fashion brand and growing up in New York.

Jade Jagger, 40, is a jewellery designer known for her ethnic beaded designs, and is the daughter of the model Bianca Jagger and Mick Jagger. In 2001 she was appointed the creative director at Garrard, a position she held for five years. Her jewellery is stocked at Joseph and in her own shop in west London ( jadejagger.co.uk ). She also designs interiors for Yoo, a residential design company with properties in London, the Cotswolds, New York, Marrakesh and India. She lives in west London with her two dogs, Louis and Lady. Mornings I wake up fairly early at eight o’clock and have a cup of tea or 10.

After that my routine varies depending on where I am because I spend a lot of time in India for work. Now that my two daughters, Assisi, 19, and Amba, 15, have moved out, my routine is completely different. I wish someone had prepared me for how different my life would be. I had Assisi when I was very young so I’ve spent most of my life taking care of them. It was a shock when they moved out.Childhood Until my early teens I lived with my mother in New York and I spent a lot of time in the company of her friends, mostly artists and designers, such as Andy Warhol, Ross Bleckner and Francesco Clemente, none of whom had kids, so I was like their shared child. I always felt quite proud to be the only child in that group.

I had a lot of attention and a lot of people passing down their little goujons of knowledge to me, which was quite exciting. It was quite cute to be the mascot and to have all those mentors. I received a lot of gifts from them including this painting that Warhol gave to me for my 10th birthday. When I was 14 years old I came to England and went to boarding school at St Mary’s Calne. Houses I moved to Ibiza when I was 25 and I bought a few houses up in the hills on the quieter north side of the island with beautiful views to the sea. My children were brought up there. I love the Mediterranean for the fact that winter is over in a minute and the almond blossom arrives in January. I am selling one of the houses on the estate but I will always have roots there. I also have a property on the beach in Goa that I rent and my shop is very close by.

When I’m there, I’m always barefoot and I hardly ever get in a car. It’s where I feel at my most comfortable, an inspiring place.Exercise I walk the dogs in Hyde Park every day. I used to go to Wormwood Scrubs but a fellow dog walker told me that there’s a rapist there, so now I go to Hyde Park. When I’m in India I get up at dawn and go running on the beach. I used to do a lot of yoga but the repetitiveness started to tire me.Lanvin I have an unhealthy obsession with Lanvin. I probably have between 30 and 50 pieces of clothing, shoes and bags, including this black bag that I bought for Paris Fashion Week last year. I always go to Paris to see the Lanvin show – they invite me and are very kind to me. I love the way the clothes are so fluid and sensual; they fit me very well.

My daughters pinch my clothes, which was fine when we lived together because I could march into their rooms and get them back, but now they live down the road so it’s very annoying. Wine Red wine is my tipple of choice – well, one of them anyway. I assume that the Croix de Beaucaillou chateau approached me to design its label because I had previously designed the Guerlain Shalimar perfume bottle. Having come from Garrard, I like working on products, especially on classic brands where you work with heritage. For this wine bottle I wanted to create something heraldic and opulent and I love gold – anything gold.

Best present For my 40th birthday recently my boyfriend Adrian Fillary made me this lovebox with a big kiss on top, decorated in playing cards with a fitted carpet inside. Adrian founded the music festival Lovebox, so it made me laugh. I’m not easy to buy presents for but he crafted this and filled it with lots of meaningful little presents. For example, I have a thing for knives, so stuck to the underside of the lid is a box of vintage butter knives.

For a while he told me he was working late, which made me nervous, but in fact he was putting together this box of treasures. Cotton buds I am completely obsessed with cleaning my ears with cotton buds. Another present inside the lovebox was this vintage ear bud holder that Adrian must have found in Portobello Market.

I sometimes clean my ears up to five times a day. Even having buds in the same room makes me want to have a go. When I’m in India the cheap ones freak me out because I worry they’ll drop off inside my ear. In the UK, I like Johnson’s.Jewellery This emerald ring is my favourite piece of jewellery. I made it in India and I absolutely adore it. The ring with coloured stones was a present from my father for Christmas last year. It’s a 16th-century Navratna ring and each stone is representative of a different planet. People in India wear Navratna rings for good luck.

I designed these earrings and pink beaded necklace and made them in Jaipur, and they are stocked in my shop. Moves like Jagger I listen to all sorts of music but I’m not musically talented. Everyone expects me to be a good singer or musician but I really am terrible. I’m a great dancer though.Icons I really hate it when people ask me who my icons are. When your parents are Bianca and Mick you don’t really need any more icons in your life. – Thetelegraph

US ships ‘in second rescue of Iranians in Gulf’

US ships 'in second rescue of Iranians in Gulf'