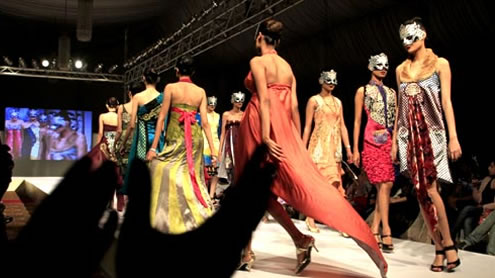 KARACHI: The third Karachi Fashion Week spanning four days opened with Fifth Avenue showing an assorted collection of trendy menswear and women’s wear in a variety of designs and basic knitwear that holds appeal for the younger crowd and the international buyers.With the show being seen live in 18 countries, according to the organizers, the week provided an impetus to the presenters to take extra measures at styling.

The others who showed in the daytime slot included Newports Institute with their highly experimental wear based on the designs of its fashion students and flamboyant designer Aamir Baig who showed a collection of knee-length dresses of sheer fabric and minimal embellishments to the tune of the latest hit Lollywood track, Chhamak Chhallo.However, things turned interesting further in the evening slot when Waseem Noor fresh back from showing at Pakistan Fashion Week, the UK, showed a stunning collection of fusion wear in strong, bold colours and a heightened sense of personal style.

But it was KFW veteran Sharifah Kirana-Ghazali who floored critics with her take on bridal wear in ivory mostly with embellishments and painted face silhouettes along with expertly-crafted dresses that fit the models like gloves. The line was inspired by her home country Malaysia’s legend of Tun Teja of Malacca, regarded as the most beautiful woman of her time.Jazib Qamar in menswear got a resounding round of applause as his menswear opened new vistas in design and got the crowd all charged with its expertly crafted low-crotch pants to jackets that complimented the male physique no end.Finally, Trevor Castelino’s take on western wear with a line strongly inspired by salsa along with a few bridal wear closed the show with a somewhat extended segment in which in black line stood out as the strongest in the entire collection.

Foreign buyers are the backbone of any fashion week and KFW boasted quite a few of them with potential buyers coming from Australia, Ireland, Spain, the Netherlands, the UK and more.The KFW show started shortly after the slated time and ended around 10pm with the best male and female model awards going to Usman Patel and Saba Sikandar, respectively.The KFW will continue for another three days with noted celebrities and fashionistas expected to make an appearance at shows featuring designs by Rizwanullah among others.

The choreography on the first day of the KFW was done by Imran Kureishi, hair and make-up by Aliya Tipu and Tariq Amin as the consultant. – dawn