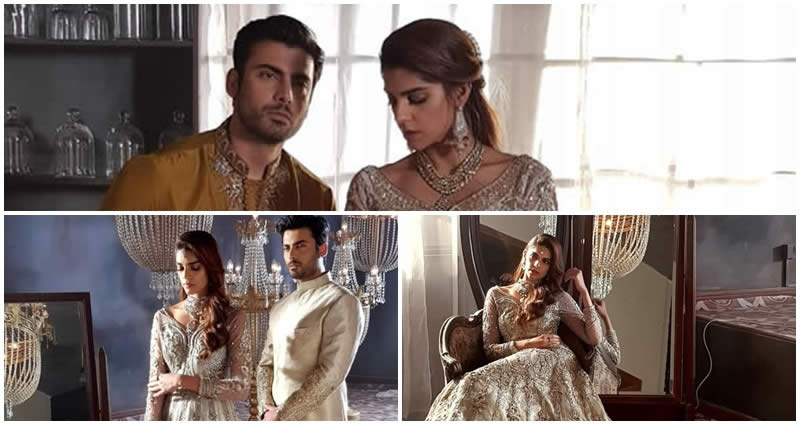 Fawad Khan is undoubtedly the biggest heartthrob in Pakistan. Even in India, he’s got a huge fan following. Humsafar, his hit TV serial with Mahira Khan, was lauded worldwide, after which he starred in Zindagi Gulzar Hai opposite Sanam Saeed and earned even more praises from across the globe.

While the actor has been missing from the TV screen – and the silver screen for that matter – for some time, his photo shoots always manage to bring him back into the limelight.

Earlier this year, Fawad modeled for his wife Sadaf’s collection, under the banner of SFK Bridals. The clothing line was featured in an Indian luxury magazine called Brides Today in which the Humsafar pair looked breathtaking. Now, SFK Bridals is all set to launch its latest bridal collection featuring none other than Fawad himself and his Zindagi Gulzar Hai co-star Sanam.

Donning a silver and gold voluminous gown, Sanam looks like a fairy in the ensemble. The embellishments on the dress complimented the light hues used, which the Bachana star paired with loose curls. A heavy neck piece added a tinge of glamour and also highlighted Sanam’s toned collar bone. The dupatta featured some cut-work exhibiting Sadaf’s craft as a designer. On the other hand, Fawad exuded Prince Charming vibes in a cream sherwani. The sleeves featured some beadwork, making the outfit look very fashion-forward, yet classy. The Khoobsoorat star paired the sherwani with a fitted trouser and brown shoes. Next, Sanam wore a white ensemble with heavy gold and silver embellishments on the sleeves. A hint of colour was also thrown to add detail while the neck line and the outfit didn’t feature a ton of bead work. This long kameez was paired with a mustard lehenga to balance the white and add a dash of traditional wedding colours, as Sanam sported pulled-back hair and a kundan necklace. Similarly, Fawad also opted for a mustard kurta with gold and silver work on the collar. For the last look, the starlet looked like a desi princess in a bright red gown. Combining both traditional and modern cuts, Sanam’s outfit had heavy beadwork on the top which gradually transforms into lighter embellishments at the feet. However, the border at the end balances the rest of the outfit. A chiffon dupatta with similar details add the traditional touch without overshadowing the work on the gown.