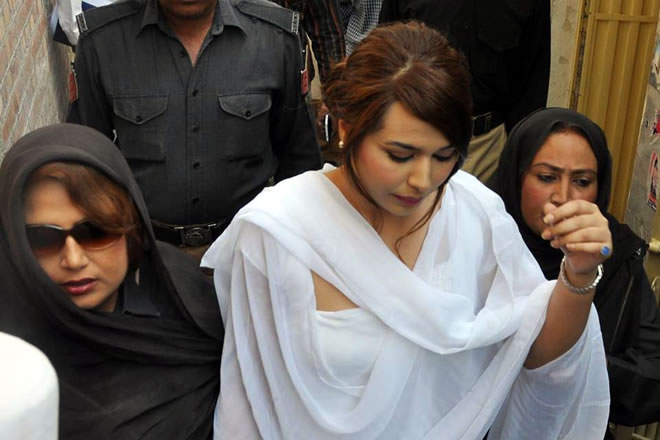 The currency smuggling case against supermodel Ayyan Ali was not so complicated as it seems to be, because a few months before her arrest a foreigner facing a similar offence was set free after paying a nominal fine of Rs2,000.

Ayyan was caught before boarding a Dubai-bound flight at the Benazir Bhutto International Airport with $0.5 million in her suitcase on March 14. Since then, the supermodel has been detained at the Adiala Jail. Her bail-after-arrest applications were rejected by the court of customs, excise and taxation and the Lahore High Court. It may be noted that Oraphan Kanma, a Thai national, was also caught for the same offence at the same airport on October 7, 2014. Unlike Ayyan, who was carrying the foreign currency in her suitcase, Kanma had stitched the dollars, pounds, Euros and Thai baht worth Rs5 million inside her coat. Under the law, she could carry less than $10,000 and Rs3,000. Kanma, who was working in the health club of a hotel in Islamabad, was produced before the customs court on October 8 and three days later she was granted bail. Her trial, however, continued till February 24, 2015.

The court imposed a fine of Rs2,000 on Kanma for trying to smuggle the foreign currency. She deposited the amount with the officials concerned and walked off.  Advocate Asghar Ali Mubarak, who represented Kanma, told Dawn that it was a simple matter so the court released the accused within a week and decided the case in five months. Though she had been convicted, the court imposed a nominal fine on her, he said. “The main reason was that Kanma’s case was not highlighted in the media,” he said. Another factor behind the early disposal of her case was that the Thai embassy vigorously pursued the case.

On every date of the hearing, an official of the embassy was present in the court. The embassy also remained in touch with the customs officials, said Mubarak. A lawyer in the panel of Ayyan said in most of the cases the customs court granted bail to the accused after a few hearings. “The model has not been fortunate to be released on bail even after about two months.” He added that the customs officials were getting record publicity in the case so they were lingering the matter and creating unnecessary hype through the media.

However, Amin Feroz, an official of the customs’ prosecution, when contacted, said it was not an ordinary case and if convicted the model could get 14 years’ imprisonment. The court may also impose a fine on her, he added. “Not in every case an accused obtains the bail,” he said, admitting that in some cases the person detained for currency smuggling got bail from the trial court and the high court. In some cases, the customs court awarded imprisonment as well, he added.