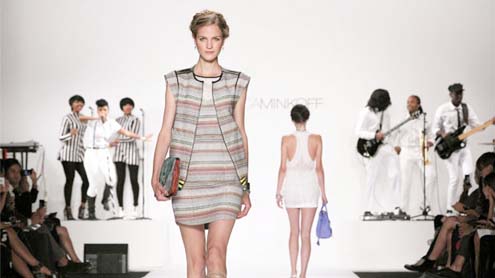 Herrera, 74, who dressed Jacqueline Kennedy and created daughter Caroline Kennedy’s wedding gown, whipped up optical illusions using black-and-white stripes and geometric prints with pink and orange accents.She teased out views of the shoulders, back, neck and arms with organza panels and overlays.Mirano, 22, who made a splash dressing Lady Gaga in paper and who says Katy Perry may soon wear his next surprise, went full throttle with metallic gold python bustier dresses and dramatically sheer frocks and pants.

Venezuelan-born Herrera said in a statement at her show that the collection was inspired by the Kinetic Art movement, which uses optical illusions to make works appear to vibrate.Sheer patterned fabrics were layered over bold motifs so “the clothes in motion create a virtual, multidimensional experience for the viewer,” Herrera said.“The silhouettes are cut very simply, but they are very feminine and very easy to wear and with a lot of movement, which is what I wanted for this year,” she told Reuters.

Holmes & Yang, a small line by actress Katie Holmes and stylist Jeanne Yang, featured daytime frocks, sundresses, camisoles, a dress-and-coat set, a menswear-inspired jacket and trousers, pencil skirt and gowns – enough for a perfect closet.The looks were sweet and simple, but like clothes one might image the actress wearing, a little hardened at the edges.A floor-length midnight blue V-necked gown was trimmed in black leather, a silk tweed motorcycle jacket covered a bustier dress, and a soft suede safari-style jacket topped silk shorts.

In a statement, Holmes & Yang said they chose to “toughen up” their delicate pieces.Mirano, a New York native, said his muse was the shapes and fabrics of lingerie.“We’re using a lot of lace – something that’s quite sweet – and pairing it with python, something quite sinister,” he told Reuters. “It’s a nice juxtaposition.”His collection included a trench coat in a white laminated French lace with prominent bra cups and high-waisted shorts sewn from platinum metallic python.

Tommy Hilfiger was all about sand, surf and sun – complete with a boardwalk for the runway, sand dunes as the backdrop and the music of the Beach Boys.The collection sported colors from saturated oranges, reds and teals to ocean-washed blues and sun-kissed apricots and salmons – an extraordinary number of colors, particularly compared with many of the muted, neutral collections showing elsewhere.Scuba references were foremost, evident in neoprene-bonded leather and waistbands folded like an open wetsuit. Hilgifer’s women’s collection played with classics such as the polo shirt, barracuda jacket and Hawaiian prints.

New York-based designer Donna Karan offered up an “Urban Culture”-themed collection with voluminous trenchcoats and simply draped gowns.Silk shirts plunged well below the cleavage, while oversized lapels on jackets lent movement to what Karan called “a chic urban wardrobe of day into night options.”The collection was one of many this week featuring beaded embroideries, but Karan took the ‘70s inflection a step further with a handwoven suede fringed jacket and caftan blouses that might have been worn by Ali MacGraw in her “Love Story” heyday. Seoul-based designer Park Youn Soo, one of four designers showing as Concept Korea, mixed the feminine and masculine in a black and white collection with bursts of pink and pale blue.

He paired leather biker jackets with a white pleated, elaborately embroidered dress, silk shorts and a leather-trimmed, printed silk dress.He said the collection was inspired by the Korean traditional library.“It was all about taking the space into the collection using the colors from the traditional library — patterns, prints and books — taking that into the print artwork,” he said of his Big Park collection.Concept Korea included ChoiBoKo’s punk-inspired designs, designer Suk-Tae Lee with bold, block geometrics and menswear’s Tae Yong Ko under his Beyond Closet label.

Designer Ralph Rucci presented neutrals – white, black, nude – with pops of coral and bronze, all with simple lines and impeccable tailoring, as demanded by his traditionally high net-worth customers.He showed a strapless multi-layered “black paper infanta” and “cage” dresses — essentially silk with a sheer overlay.A standout was what he called an “eyelash cage” — a white spaghetti strap sheath with a floor-length overlay.Czar by Cesar Galindo featured the week’s ubiquitous cropped and sheer tops, draped pants, a black-and-white motif and dramatic dresses and floor-length pleated gowns in brilliant pairings of blue, scarlet, silver and turquoise.New York Fashion Week was in its fifth day on Monday and ends on Thursday, Sept. 12. – KahleejNews