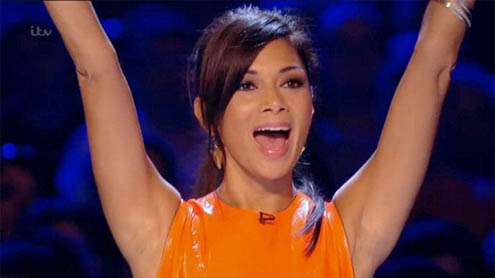 Week Two of The X Factor, and it was hard to know whether we should worry more about the judges’ hearing or their sanity.The concept behind this year’s big innovation – the ‘Double Auditions’ – seems to have eluded them.

They merrily sent virtually every act through, often on the basis of Saturday’s performance or even ‘potential’ instead, with Louis Walsh in particular incapable of voting ‘No’. They also seemed to take the view that what British pop music needs in 2013 is the new Lucy Spraggan.As for Nicole Scherzinger, she evidently feels that the macho glamour of a Grand Prix driver risking life and limb is not as much of a turn on as yodelling.

You can be sure that at some point over the weekend, Lewis Hamilton’s manager received a call from his client ordering him to find him the best damn yodelling teacher in Monaco so he could start lessons immediately.Seventeen year-old Barclay Beales’ yodelling to What Makes You Beautiful had the Pussycat Doll who recently dumped the F1 star on her feet and strutting her stuff, in an uncontrollable frenzy.‘It’s super-duper hard,’ she said, presumably talking about the technique required (to yodel that is).

‘I taught myself how to yodel,’ Barclay explained, earnestly. ‘Just by watching videos.’He could have been making it up as he went along for all we knew.‘Yodelling on stage is a huge risk.’It sounded kinkier, and enjoyable, than it was.‘He’s a brilliant yodeller,’ declared a typical pompous Gary Barlow, like he would know.Sharon Osbourne expressed the concern: ‘I don’t want you to be a gimmick.’

He was YODELLING for God’s sake!As ‘gimmicks’ go, he made Jedward look like The Isley Brothers.As for his singing, the judges loved it, but it was more of a ‘no-del’ from me. The ‘Double Audition’ idea seemed pointless when there was never any possibility that Yodel Boy was not going to go through – even though the noise he made was like a sheep going through a mangle.

Likewise, Brummie hotel housekeeper, Relley C, who followed her soulful performance on Saturday with a caterwauling rendition of the Chase & Status dance classic, Blind Faith.The judges were unanimous.‘It did not translate today,’ said Scherzinger, sadly.’It wasn’t great,’ sighed Louis Walsh. ‘But I think you could be amazing.’’I think you are capable of much better,’ agreed Sharon Osbourne.

Their unanimous verdict was replicated by four ‘it’s a yes from me’ with self-appointed spokesman Gary Barlow explaining: ‘the reason we’re on this panel is we can see potential.’ If there was no actual point in Relley doing the second audition, the same should have applied to The Dolly Rockers and The Euphoria Girls who, in the end, were the only acts to be sent home, as they should have been first time round.Barlow acted particularly let down by the Euphoria Girls’ fiasco, even though he had described their audition the night before as ‘like something that arrived at a children’s birthday party.’

‘I don’t know where to start!’ he blustered – the horrible, screeching vocals being the obvious answer.Even though their performance was like an exercise class at Butlins, Louis Walsh still wanted to put them through. ‘Yes’ votes were dished out so indiscriminately, Sunday’s show was totally pointless.Seventeen year-old Luke Friend (the best act of the night) and children’s football coach Tom Mann were never in jeopardy, even though Mann was so squeaky-clean (and squeaky), he made Ed Sheeran look like Bob Dylan.

As for the other four contestants, the amount of time devoted to their back-stories at the start of the show always indicated they were going to be received favourably.Not that these were particularly unusual or appealing.Jade Richards and Melanie McCabe had entered The X Factor before, 7 times between them, both making it to judges’ houses.Shelley Smith was a white van driver and played the Cute Young Daughter card, with 7 year-old Madeleine telling us that if mummy won the X Factor, she wanted her to buy some puppies.

Eighteen year-old Abi Alton showed how sweet/soppy/quirky she was playing the Flowers In The Hair card. Frankly, watching them travel down to London wasn’t as fascinating as the producers seemed to think it was.All four women were very nice, admirably brave people but there should be a veto on sentiments like ‘I can’t even put it into words how much today means to me’.We probably assume it was ‘the biggest audition of their lives’ – singing in front of such a large audience (4000 I think it was, I’m not sure. They didn’t mention it much. Only about 4000 times.)

As for their performance, I was obviously missing something.None of them seemed as special as the judges thought, apart from the one they said wasn’t.Shelley’s choice of ‘Feeling Good’ was desperately predictable.She had a big voice but it wasn’t that good and with her gurning presentation, it was all a bit karaoke.‘You’ve got it all’ said Louis, lying. – DailyMail