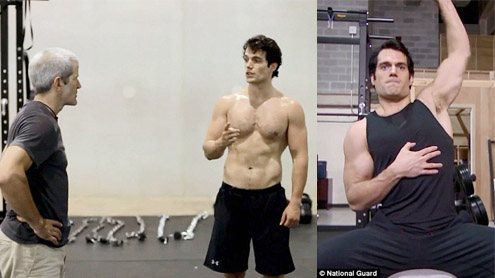 British actor Henry Cavill has given fans a glimpse of the grueling fitness regime that helped get him into superhero shape for Man Of Steel.

And all the hard work was worth it for the 30-year-old star because the blockbuster took in a massive $128.7 million during it’s opening weekend making it the highest grossing movie in June.In the video, Henry stripped off his shirt to reveal his incredible muscles and is seen lifting huge weights and kettle-balls.He pays tribute to his trainer Mark Twight for helping him get into tip-top condition for the movie that will make him a household name around the world.

‘Mark Twight is probably one of the most incredible people I’ve ever met,’ he said.’He’s opened my eyes to seeing past what I thought were my limits. He’s a remarkable man, truly.’He understands what I’m going through physically. He understands me because he sees what I’m going through as a person, which I think is what makes him such a good trainer.’The training regime adopted by Cavill and Twight has been used to help a new recruitment drive for the National Guard in America,

Twight claimed that everything that the actor went through to get in shape was just as hard as any training a soldier would do calling it a ‘process of self discovery’. And the British actor was in total agreement with his mentor about this point of view.’One hundred per cent – the training has been a genuine discovery,’ he revealed.’Just like when Superman learned to fly I learned I could do all sorts of things in the gym – he has opened my eyes to what I thought was was my lens.’ Despite looking in such great shape now, Henry revealed in the latest Details magazine that he used to be self-conscious about his body.

Although he is now admired by millions of women around the world that wasn’t always the case for the star.The handsome star was teased about being fat when he was younger but he’s the one having the last laugh now by having such an amazing body and career too boot.’I was fat … I was Fat Cavill’, he told the magazine.But after he landed his first major role in the 2002 film The Count of Monte Cristo he was inspired to lose weight and get in shape.

‘I lost one and a half stone  921lbs and I wasn’t Fat Cavil anymore,’ he revealed.The actor bulked up to play Superman with a strict fitness regime with his trainer while sticking to a 5,000 calorie a day intake.Although the star was still coy about what weight he bulked-up to for the part.’I will say I was a lot bigger as Superman … a lot bigger, I’m not say how much,’ he added.’It’s modesty about the weight – I’ve always been worried about my weight – but I also don’t want to invite the debate: Henry weight this, so he’s the perfect Superman.’Or, Henry doesn’t weigh this and therefore he’s not believable in the role.’Whatever the case all those sessions at the gym appeared to have really paid off for the star.