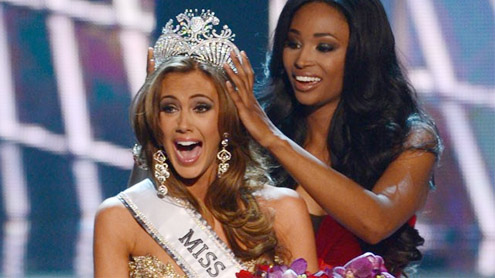 A 25-year-old accountant from Connecticut with a secret glamorous side is the new Miss USA.

Erin Brady of South Glastonbury, Conn., won the beauty pageant Sunday night after strutting in a white sparkly gown and answering a question about the U.S. Supreme Court’s decision upholding widespread DNA tests.She beat out 51 other beauty queens every U.S. state and Washington D.C.at the Planet Hollywood casino on the Las Vegas Strip to take the title from outgoing champion Miss Maryland Nana Meriwether.Asked if she agreed with the decision to swab the cheeks of arrestees, Brady said she did, since they had committed crimes after all.

As Brady was crowned, she could be seen mouthing “Oh my God, oh my God” with tears in her eyes.As the stage emptied, the blonde woman spoke about her commitment to fighting drug and alcohol abuse, which have marked those close to her.”I grew up in a family influenced by that and I think it’s really important to help the children of families that are suffering from those problems,” she told The Associated Press.As Miss USA, Brady gets the crown and a New York apartment for one year. She is expected to spend her title reign on a nationwide speaking tour and raising breast and ovarian cancer awareness, the organization’s official cause.

The Central Connecticut State University fiance major could not contain her excitement at the prospect of telling her bosses at Prudential Financial she wasn’t coming in tomorrow. Or ever again.Asked what she was looking forward to now that the competition is over, she described a routine that sounded not very different from her training regime: getting in her beauty sleep and hitting the gym.Her father Francis said he always knew his math-oriented daughter was a glamour girl. She and her sisters used to strut around and pretend they were beauty queens.

“They would model around the pool,” he said.Her sister Audrey, 20, said with tears in her eyes that her grandmother would orchestrate the shows.”She’d be like, ‘prance around the pool like Miss America.'”The family was taken by surprise when Brady announced that she would be entering the Miss Connecticut competition two years ago, but cheered her on.”She just went up there on a whim, man. But it was like, ‘Just go for it. There should be more people like you who are competing, where it’s not all about the hair and the makeup, but personality too,'” Audrey said.

Fiancee Tony Capasso said it was her winning personality that propelled her to the crown. He said he advised her to compete without makeup.Brady told The Associated Press she hopes that her background will help dispel the image held by some of the bimbo beauty queen.”I think that now more than ever, they’re accepting that we’re all intelligent individuals and that it’s really not a stereotype anymore,” she said.Unlike the rival Miss America pageant, Miss USA doesn’t ask its queens to perform a talent or choose a charity mission.Brady will represent the United States at the Miss Universe pageant in Moscow this winter.Last year’s Miss USA, Olivia Culpo, won that international crown, becoming the first Miss USA to ascend to Miss Universe in 16 years.Brady said she is determined to pull of that feat for the U.S. again. – AbcNews