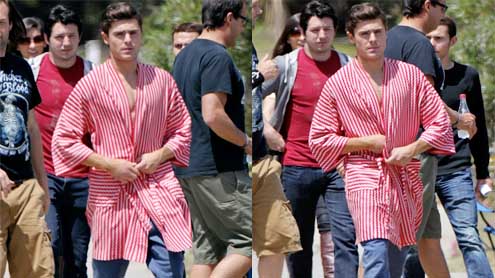 On Monday, he rushed to set with his collar undone and his belt unfastened.And on Tuesday, Zac Efron was still in a state of undress as he was spotted on location yet again.

The 25-year-old this time showed a glimpse of his finely-toned chest as he walked on the Los Angeles set of his new film Townies. His hair was perfectly coiffed into a 1950s-style side part, but the rest of his ensemble was a little more laid back.Blue sweatpants that tightened at the ankle kept the High School Musical star cosy.But minding his cast mates and crew, he threw on a red and white striped robe. His ripped chest peered through the top of the attire, the waist of which Zac tied in a knot.

Adidas slip-on soccer sandals rounded out his laid-back look, proving that despite his burgeoning career, Zac is still a casual California guy at heart.Perhaps his comfortable ensemble was to assuage remaining pain from his recent hand injury.While filming a fight scene with co-star Dave Franco, the action man broke his hand.When he visited Live With Kelly & Michael last Thursday, he said: ‘I had to go back to work so I couldn’t really wear a cast. So they [the medics] put like a titanium plate in it and a bunch of screws.’I don’t know why I’m telling you this. My hand, in theory, is back to normal, it just looks really gross.’ – DailyMail