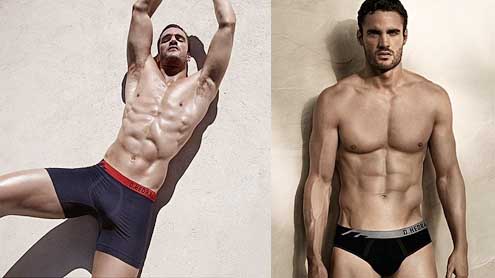 She may be occupied with her rekindled relationship with Danny Cipriani – but surely Kelly Brook will allow herself a tiny glimpse at these pictures of ex boyfriend Thom Evans modelling men’s underwear.

The rugby player-turned-model looks the very image of fitness as he poses in boxers and briefs for D.Hedral’s Spring/Summer 2013 campaign, seen exclusively on MailOnline.One shot sees the 28-year-old sprawled out on the ground with his chiselled abs on full display; another in a clinch with a female model, also in her D.Hedral underwear.Thom, who has been dating former 90210 actress Jessica Lowndes since his two-year relationship with Kelly ended in January, is modelling the pants as part of the campaign for D. Hedral’s men’s seamless underwear.

The new collection incorporates the brand’s patented ‘Anglefit Technology’. And the pants – made of ‘super-light, anti-sagging, quick-drying microfabric’ – certainly hug Thom’s shape in the steamy shots.The firm say that their unique new technology gives ‘enhanced figure-hugging definition and  comfort’.The fabric has been designed to stretch depending on the shape of the wearer’s bottom to create a second skin and enhance the appearance of the rear.The D.Hedral collection is available online from tomorrow. – DailyMail