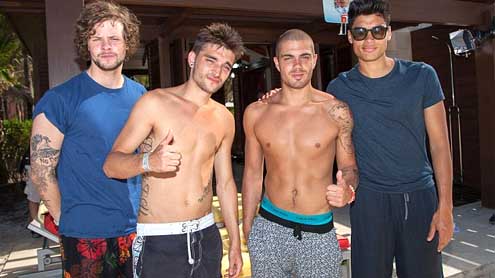 They’ve spent the past few weeks in the California sunshine working in Los Angeles.So The Wanted were looking forward to some much needed time out as they escaped to the Bahamas.

The Brit five-piece arrived in the Caribbean last week shortly before Nathan Sykes was diagnosed with a ‘haemorrhaging vocal cord’.Although the singer joined his bandmates for some of the activities, it soon became apparent he was unwell, so he spent time taking it easy indoors while the boys lapped up the sunshine.On Wednesday, the group announced Nathan was having to undergo specialist surgery to save his voice.

He left the band in the Bahamas for Los Angeles, where he was expected to have the operation on Thursday – his 20th birthday.And although they were in the sunshine, their young bandmate was clearly on Max George, Siva Kaneswaran, Tom Parker and Jay McGuiness’s minds.They tweeted: ‘HAPPY BIRTHDAY lil Nath & the very best of luck for your op today. We’re thinking of you and love you brother.’The group’s publicist said in a statement: ‘We can confirm that The Wanted’s Nathan Sykes will under go specialist throat surgery on Thursday April 18 in Los Angeles and as such will be taking an unforeseen hiatus form The Wanted.”The priority for Nathan, his label and management is that he is given time to recover and receive the best treatment possible.’

The operation means that Sykes won’t be able to talk for a month, let alone sing, ruling him out of recording sessions for the  band’s new album, and potentially their world tour which was due to start later this year.The group decamped from Hollywood to the Cove Atlantis in the Bahamas last week, where they took full advantage of all the activities on offer.As well as enjoying a dip in the warm Caribbean sea, they also visited the resort’s water park and marine park.Irish bandmember Siva, 24, was accompanied by his girlfriend Nareesha McCaffery, so made sure they enjoyed frequent some alone time.

Siva showed off his model figure in a pair of dark trunks, while his girlfriend worked on her tan in a mismatched white and pink two-piece.Tom also brought his girlfriend Kelsey Hardwick, who he has been dating for three years, who was showed off her tan in a white bikini.Although thought to be single, Jay was spotted cosying up a bikini-clad blonde in the sea.Max and Jay teased Kelsey as they fed fish around her by throwing a leftover sandwich in the water.While it was supposed to be a holiday, the cameras from E! were in tow filming for their forthcoming reality show The Wanted Life, which is due to hits US screens in June.

As well as spending the day on the beach, the band also got into wetsuits to meet the dolphins and swim with sharks at the Dolphin Cay Resort.And after getting close to nature, it was time for some thrill-seeking as they went on some water rides at the resort water park.Tom was spotted riding the 60ft Leap Of Faith water slide and cruising along the Lazy River.With Nathan set to spend his birthday under anesthetic, the boys treated him to an early birthday cake.He looked embarrassed as he was teased by Siva, who wrestled the singer into a hug for an affectionate kiss. – DailyMail