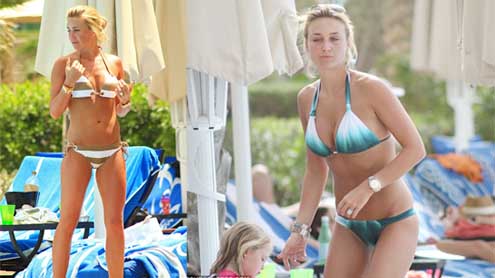 She’s been working away in the gym as part of her 2013 new year’s resolution, even sticking to the regime while she’s been on holiday.

And now Alex Gerrard is certainly showing off the fruits of her labour as she soaks up the last of the Dubai sun before heading home again.Footballer Steven Gerrard’s wife was spotted soaking up the rays this week as she showed off her perfectly honed bikini body.The 30-year-old oozed confidence, even going make-up free as she enjoyed some down time with her daughters, friends and mother.Alex stood out as she showed off her physique in a white and gold striped bikini for one sunning session by the pool.

She stood up and stretched her legs after lying on her lounger for the majority of the day.Gerrard completed her look with bangles and rings adorning her wrists and hands while she wore her blonde locks scraped off her face.The pretty mother-of-three has been keeping up her strict routine even while basking in the heat of Dubai.She wrote on Twitter during the trip: ‘Just been for a run along the beach… bl**dy hard graft in the heat!!!’But it’s obviously doing wonders for her as she changed into yet another bikini later in the day and looked equally impressive.

Alex opted for a green and white tie dye number as she turned around and revealed her pert derriere.Although her relaxing holiday is starting to draw to a close. On Friday she spent her last day enjoying some down time with her girls before staying on an extra few days for a photo shoot.The model will be showing off her bikini body to even more effect as she shoots a new campaign for Lipsy.

She commented on Twitter: ‘its my last night 2nite with the family in Dubai , looking forward to my photo shoot with @LipsyLondon ,few extra days !!workinthesun.Alex then added on Sunday evening: ‘Just had a lovely dinner with @marshall_anneli but early nite for us ready for my Lipsy London shoot tomorrow Exciting TimesAhead.’  – DailyMail