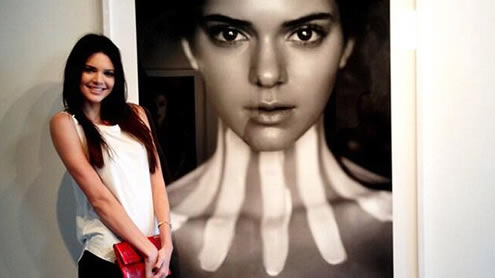 Kendall Jenner dreams of becoming a Victoria’s Secret model. The Keeping Up With The Kardashians star – who is the younger half-sister of Kim, Kourtney and Khloe – has managed to carve out a successful career in modelling for herself and now aspires to join the elite group of lingerie models.

Kendall, 17, attended a private viewing of Nomad: Two Worlds, a photography exhibition by Russell James which included images of the striking brunette shot in the Australian outback, and revealed working with Victoria’s Secret ad photographer Russell had given her big ideas. She told media: ‘It’s always been kind of a dream of mine. It’s something I’d love to do.’

Kendall also admitted fans will get to see a different side to her and her 15-year-old sister Kylie in the future as they pursue different avenues. She said: ‘Me and Kylie are sisters, but not everything we can always do together … She’s not trying to be a model. ‘She’s trying to be more like a personality, so… We’re trying to kind of separate ourselves – not in a bad way.’ Kendall faces stiff competition from British model Georgia May Jagger, who also recently said she would to love to be invited to walk in the lingerie giant’s televised catwalk shows. – Dailymail