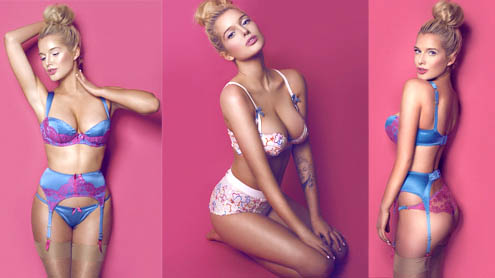 She’s already got a Marilyn Monroe tattoo on her left forearm.But now it seems that Helen Flanagan is channeling her inner screen siren.

The 22-year-old posted pictures on her twitter wall of herself wearing some rather skimpy floral underwear.Dressed in lacy sets from Agent Provocateur, the former Coronation Street actress pouted her way through the photo shoot.And with Spring having just arrived, the floral smalls captured the season perfectly.

Leaving little to the imagination, the former I’m a Celebrity Get Me Out Of Here! contestant flaunted her assets. And whilst some might argue that Helen is already a little overexposed, her legion of twitter fans seemed to appreciate the shots.Model and former Celebrity Big Brother contestant Georgia Salpa led the praise, saying: ‘Gorgeous!! I have that @TheMissAP set also love it’

Wearing a whole variety of undergarments, including french knickers, thongs, balcony bras and suspender belts, Helen seemed more than comfortable baring her flesh. But the blonde didn’t leave the 50s look to her smalls. She was also pictured shopping around Alderley Edge, Chester in a similar get-up.

Dressed in a red cropped cardigan, a white cinched waist belt and a black comic strip pencil skirt, she added a pair of black retro cats eye sunglasses too.A slick of red lipstick finished the look, whilst Helen also carried not one, but two designer handbags on her arms. – DailyMail