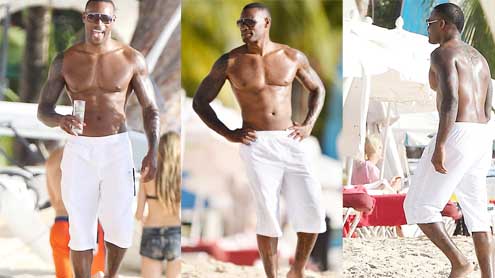 He was once named as one of the ’50 Most Beautiful People in the World’ by People magazine and played his supermodel self in the hit movie Zoolander.

And Tyson Beckford showed off his famous ‘ridiculously good looking’ body as he hit the beach in Barbados on Tuesday.The American model and actor, 42, displayed his impressive muscles and array of arm tattoos as he soaked up the sun during his getaway in the Caribbean.Wearing just a pair of white board shorts and some shades, Tyson looked like he was on set of his very own modelling campaign as he posed and preened on the sand.

Clutching onto a refreshing cocktail, the handsome star flashed his famous pearly whites and wide grin as he settled into relaxation mode.And it seems that Tyson was able to take advantage of a relatively empty beach, as he earlier tweeted: ‘Barbados empty beach, priceless!’Tyson rose to prominence after he was recruited by Ralph Lauren as the front model for the company’s Polo line of male sportswear in 1993.He then went on to score several high profile modelling gigs with an array of well known designers.

In 1995, VH1 named him ‘Man of the Year’ and he was also heralded as one of the ’50 Most Beautiful People in the World’ by People magazine.Tyson also famously starred in Ben Stiller’s hit film Zoolander as himself, playing Derek Zoolander’s coach who guides the dim-witted supermodel through his walk off with Hansel McDonald, played by Owen Wilson.He has also had minor roles in films such as Into The Blue and Hotel California.Tyson has also had considerable exposure from multiple reality TV shows.

He appeared on the ABC network’s celebrity reality game show I’m a Celebrity… Get Me Out of Here! in 2003, and co-hosted the modeling contest Make Me a Supermodel alongside fellow supermodel Niki Taylor.In terms of his personal life, Tyson is still thought to be currently dating his on and off again girlfriend, Australian model Shanina Shaik, who at 22-years-old is 20 years his junior.They met when Tyson mentored her during the first few episodes of the Australian version of Make Me a Supermodel.He later credited himself with her success saying: ‘I helped place her with the right people, get her teeth cleaned, her body toned up.

‘Everything changed and now everyone wants a piece of her. I hear people say, “You can do better than Tyson.” I’m like, “Really? Really?! I created her!”‘Following his comments, the model, who recently posed for Victoria’s Secret, said: ‘I did not take his comments seriously.’He has always supported me. But he did not make me. My mother made me. He’s in the dog house, but I’ll let him out if he’s good.’Tyson also shares a 14-year-old son, Jordan, with ex-girlfriend and celebrity stylist April Roomet, whom he starred with in the E! Television program Candy Girls. – DailyMail