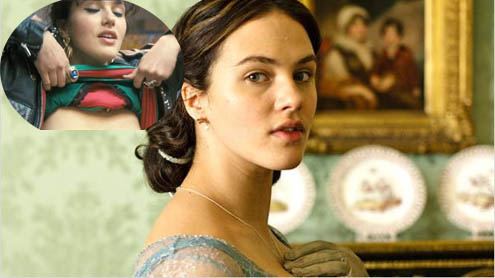 Downton Abbey star Jessica Brown Findlay says she was ‘naive’ to flash her chest in her big-screen debut.

The 23-year-old actress, who shot to fame as Lady Sybil in the ITV period drama, played a teenager who has an affair with an older man in the 2011 British film Albatross.In one scene, she lifts up her top to show her bare chest and says ‘is that good enough?’ when her character is asked to prove her age to buy cigarettes.Findlay told the Radio Times: ‘To be honest, Albatross was naivety and not knowing that I could say no.’I had no idea what was going to happen and thought I was going to be shot from behind.’

The star also sheds her clothes in Labyrinth, the forthcoming Channel 4 adaptation of Kate Mosse’s best-selling novel.But Findlay, who quit Downton despite the show’s huge success, said she would not do Labyrinth’s steamy scenes again.’In Labyrinth it is a very fleeting moment that we shot in one take, but I did find it very odd being naked in front of lots of people and I think it’s awful that women get so criticised about their bodies,’ she said.’I think if you’re going to do a nude scene, be honest and natural. Otherwise I’d be starving myself for ever, which I just couldn’t do!

‘The idea that actresses would work out at the gym for a thousand hours beforehand… I was drinking pints and eating burgers. But actually, it’s not something I would do again.’The actress, who has just filmed Winter’s Tale opposite Will Smith and Russell Crowe, said that her ambition was to write while owning ‘a little tea and sandwich shop’.’Hollywood is not for me. I love acting, but I also love London,’ she said.Findlay, whose character died after giving birth in the last series of Downton, left the hit ITV show because she did not want to fall into her ‘comfort zone’.

‘My contract was ending and I was unsure about signing away another year. Leaving terrified me, and that’s what made me want to do it,’ she said.Being afraid and going into the unknown excites me, and what scared me more was to keep going and then one day discover it was all I could do and wish I had pushed myself more. I’d prefer to fail and fall flat on my face.’She added: ‘I did Labyrinth in the break between filming the second and third series of Downton and it was such fun to discover a new character.’Acting in Downton was quite restrictive – you can find freedom within it but it’s certainly not running around, covered in mud, wielding a sword.

‘So it was liberating to play Alais, because she goes through so much emotionally, and that sort of depth of strength actually helped me with what happened to Sybil.’I returned to the Downton set and trusted myself to go all out in those final scenes.’Findlay said that she was inspired by strong women and that she would like to play writer Caitlin Moran in a film version of her book How To Be A Woman.’I am so glad there are more female writers, directors and producers in the film and television world, so instead of playing a woman as seen, prodded and poked through a man’s eye, there are role models out there’, she added. – DailyMail