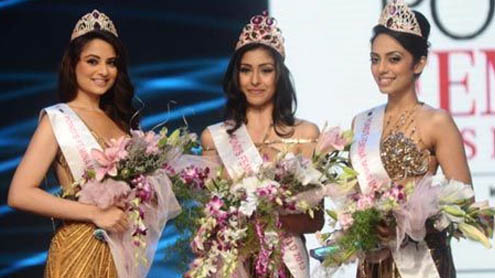 In the golden jubilee year of the pageant, this colour radiated throughout the evening—from the theme to the detail in the contestants’ gowns.Finally, Navneet Kaur Dhillon (20), the daughter of an army officer from Patiala, was crowned Miss India 2013; after Army Public School, Ambala, she attended Patiala’s Punjabi University. The first runner-up was Sobhita Dhulipala of Visakhapatnam. The 20-year-old ex-student of Vishakha Valley School currently studies at HR College, Mumbai.

The city is also the present home of Zoya Afroz (18), who was the second runner-up; originally from Lucknow, the Land of Nawabs, Zoya, an actor, studied at RN Shah High School and then Mithibai College.Faced with a rather morbid question of what her one regret would be if she were to die the following day, Navneet gathered her wits quickly and said, “The only thing I would regret would be not having done as much for society as I would like to. Issues of women’s empowerment and child labour and other social evils are a big concern.”

Amid cheers, Miss India 2000 Priyanka Chopra told the three to appreciate the crown. “It stays with you forever. It changes you from who you could have been to who you are going to be,” she said.This year’s pageant, held at Yashraj Studios, Andheri, marked a double milestone, given that 2013 celebrates the centenary of Indian cinema as well as the 50th year of the Miss India contest. In this span of time, India has won 34 international titles — second only to Venezuela. Host Manish Paul opened the evening with a nostalgic audiovisual tracing the golden history of the contest. From Nutan, Meher Castelino Mistry, Persis Khambatta and Zeenat Aman, down to Aishwarya Rai Bachchan, Sushmita Sen and Priyanka Chopra, the winners have done the country proud.

The crowns the winners wear are laden with significance. The Miss India crown bears a peacock feather in the centre, symbolizing the graceful, proud national bird of India. The tiara worn by the first runner-up derives inspiration from ‘the curves of a woman’, albeit in a metaphorical sense. The curves represent the ups and downs that confront a woman on her journey to the top.
The crown for the second runner-up is modelled along the ‘ladder of success’, showing the levels a contestant has to cross to win the pageant.The event started with host Manish Paul quoting an Urdu verse celebrating womanhood. As the event’s judges, Karan Johar, Asin, Shiamak Davar, Yuvraj Singh, Ritu Kumar, Chitrangada Singh and John Abraham, entered, their fans rose and cheered.

And then, kitted out in black, ivory and flame, the contestants, aged 18-25, walked down the ramp and introduced themselves. They had come from all over the country—Assam’s Dibrugarh to Orissa’s Bhubaneswar, Patna to Pune, and the metro cities. Among them were models, actors and even an aeronautical engineer and a yoga trainer.Comedy trio Riteish Deshmukh, Vivek Oberoi and Aftab Shivdasani pretended to gatecrash the event to ease the nerves of the women onstage.

They performed a ribald act before moving on to a dance medley. Miss India has long been known as a passport to cinema and there were no pretensions this time. All 23 finalists wore ethnic Bharatanatyam costumes or ghagra-cholis and danced to a robust ‘Radha Teri Chunri’ as if they were ready for the next logical step.A special award called woman of substance was given to Urmi Basu for her work in the field of prostitution and trafficking. It was presented by Miss India 2012 Vanya Mishra. – TOI