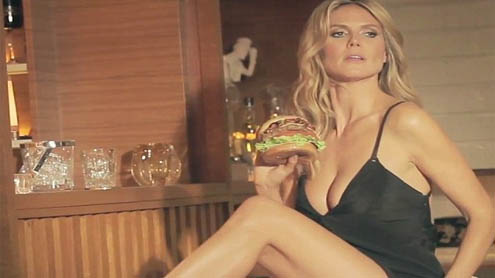 Audrina Patridge, Padma Lakshmi, Kim Kardashian, Emily Ratajkowski and Kate Upton have all licked their lips lasciviously for the camera before tucking into a calorific meat and bread snack.The juxtaposition of their toned, slim physiques might jar with the meat juices dripping down their chins but these commercials have proved to be a winning formula for the chain.And now they’ve landed their biggest name to date in the form of stunning supermodel Heidi Klum.

Unsurprisingly, the 39-year-old’s commercial for the Jim Beam Bourbon Burger is probably the sexiest installment yet… and perhaps the hottest in the history of fast food commercials. In it, the mother-of-four strips down to skimpy negligee and shows off her cleavage as she gets to grip with the southern inspired new addition to the menu.Klum plays a seductress in a recreation of the famous Mrs Robinson scene from Dustin Hoffman’s movie classic The Graduate.

‘Basically, I am Mrs. Robinson and I am seducing this cute little boy… with my burger,’ Heidi said in a behind-the-scenes video.’I shove the burger in his mouth in a sexy way,’ she adds.The commercial’s creative director Mick DiMaria explained: @We’re basically taking that scene and foodifying it.’ Heidi looks incredibly fit, toned and healthy in the revealing ad but guess what? She insists she keeps this body while still enjoying burgers and fries copiously.Heidi insists: ‘I do eat a lot of burgers, I do also eat a lot of fries.’

Because a celebrity would never advertise anything they don’t consume themselves.There’s no nutritional information available on the Carl’s Jr site about the new burger, though obviously it is glazed with Jim Beam and there’s bacon and cheese in there as well as salad and beef.Burgers at the popular chain range between 600 to a whopping 1000 calories, though there are healthier options like the carb-free burger at 500 calories and white meat sandwiches.A woman in Heidi’s age range (31 to 50) needs between 1,800 to 2,200 calories daily so she no doubt balances these treats with a fair few salads. – DailyMail