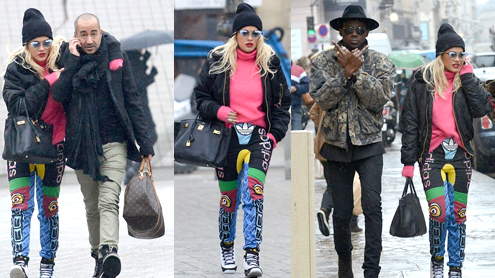 She’s known for pushing the boundaries when it comes to style.But even Rita Ora seems to be trying a bit too hard as she continues her stay in Paris over the French capital’s Haute Couture Fashion Week.

The singer has already been spotted in a number of odd fashion choices at the notoriously stylish event.But she even outdid herself with her latest bizarre ensemble when she was seen strolling around the city with some guy pals on Tuesday.The Hot Right Now singer appeared to be trying to stand out even more than usual as she opted for some garish, brightly coloured Adidas trousers.Appearing like something off a 1970s ski slope, she then teamed up the patchwork pants with a bright pink roll neck jumper and high top trainers, which did nothing for her slender physique.At one point she cuddled up to one of her male acquaintances, who was busy chatting on his phone.

She then met up with American rapper Theophilus London as the pair enjoyed some sight seeing around town.Theophilus also failed to blend in with the crowds as he also opted for sunglasses and a hat, while keeping warm in a camouflage coat and skinny jeans.It was only a day earlier that Rita had struck another bum note thanks to her odd fashion choices as she joined the rest of the celebrities at Paris Fashion Week.Rita Ora arrived at the Chanel Spring/Summer 2013 show at the Grand Palais dressed in a combination of sure fire misses.

The Hot Right Now singer oddly wore what looked like a floor-length white wedding dress which she teamed with a red leather jacket.Rita’s fashion faux-pas didn’t end there, however, as she also wore a pair of black thick heeled shoes that featured a luminous white sole.Thankfully her hair and make-up were much better than her outfit as her perfectly styled blonde hair and red lipstick made a winning combination.While in the City Of Light, Rita also caught up with her new best friend forever Cara Delevingne, greeted Rita straight off the catwalk.She posted a picture of herself with the British model and captioned it: ‘There she is my baby @caradelevingne I found you!!’Cara, 20, has been rubbing off on Rita on the fashion front, as the pair recently posed for sultry shoot together by top photographer Rankin. – DailyMail