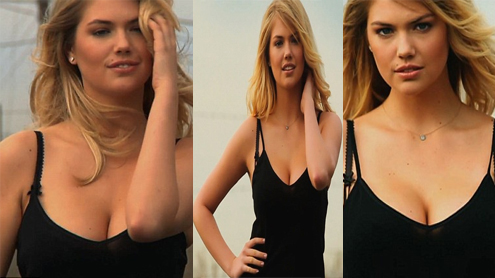 As Kate Upton pouts into the camera her fans could be forgive for getting excited.

After all, the underwear model looks as if she is about to strip down to the silky bra which can be spotted peeking out from under her vest top.A leaked preview of the new Super Bowl advert for the Mercedes-Benz CLA sees a teasing Kate pretending she is about to recreate Jessica Simpson’s famous Dukes Of Hazzard car washing scene.The blonde is seen grabbing a handful of suds, then sultrily blowing them at the camera.

Kate then strolls nonchalantly towards the luxury vehicle, apparently preparing to get her hands dirty washing the car.She smiles seductively as she approaches.Sadly for her fans she’s just teasing – with a group of football stars instead doing the hard work.Instead of joining in Kate simply walks up to the vehicle, points at the bonnet and states: ‘You’ve missed a spot.’

As the football stars look on open mouthed she then strolls off, her legs on show in denim hotpants.As an underwear model they might have been hoping the 20-year-old would show a little more flesh.Model Kate came to prominence when a YouTube video of her doing the Dougie at a Los Angeles Clippers game went viral in 2011.She has since made the jump from swimwear to high fashion, fronting the January edition of British Vogue.Kate has starred in Super Bowl spots in the past, including one for Carl’s Jr. during last year’s game. – DailyMail