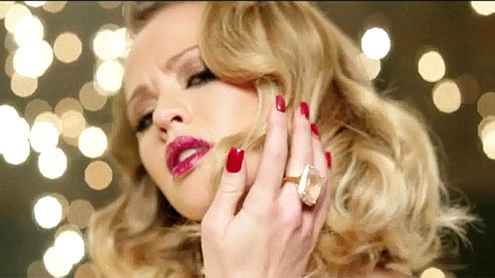 After a disappointing reunion release with Girls Aloud and Cheryl Cole’s A Million Lights also failing to sell well, Kimberley Walsh is hoping to do better.

The girl band member has released a video for her very first solo track for a cover of the single One Day I’ll Fly Away.The 31-year-old looks elegant and gracious as she attempts to launch a solo career with her album of covers.Although she is without the rest of the girls, Kimberley shines in a series of sparkly and ladylike dresses and gowns.Miss Walsh looks like a classic Hollywood screen siren in the video as she slips into a floor length gown with her hair falling gently with slight twists in it.

Kimberley started recording her debut solo album Centre Stage in Stockholm with producers Per Magnusson and David Kreuger over the summer after signing with Decca Records.She enthused: ‘I’ve always loved musical theatre and doing Shrek: The Musical definitely re-ignited the passion in me.’I really wanted to share the love I have for musical theatre by taking some classic songs and completely reinventing them.’The melodies in so many musical songs are so brilliant I knew we could create something special by experimenting with the production and I really feel like we’ve come up with some interesting takes on classic songs.’

Kimberley’s decision to release a solo disc comes after Girls Aloud’s recent reunion.They recently scored a No.2 hit with comeback single Something New but their greatest hits album Ten only reached No.9.The Strictly Come Dancing star has put her dancing practice to good use, while she’s clearly now got a taste for glamorous dresses since being on the show.Kimberley can be seen in an array of outfits, at one point posing in a black lace mullet dress which accentuates her curves and slender body.

Throwing her hand up in the air as she sings her track, Walsh looks every inch the pop princess.Kimberley sensually moves throughout the video as she gets used to dancing in a clip minus her four bandmates.She even shows off her Dirty Dancing style moves as in another section she jumps in the air to be caught by Pasha Kovalev as she wears a ballerina style costume under a spotlight.The video was shot in just one day at London’s Pinewood Studios.

Perhaps better known for her pop prowess as a member of Girls Aloud, who are currently celebrating ten years with the release of a greatest hits album and a forthcoming arena tour, Kimberley has always loved Musicals, the subject of her solo album.In many ways this album is the ultimate for Kimberley; songs that she has been singing her whole life put together in a way that is totally her own, totally unique yet connects with everyone.Always one to push herself out of her comfort zone, she managed to pack in six or seven hours of dance rehearsals a day for Strictly, while upholding her GA commitments and promoting her new solo album…no mean feat.Walsh said: ‘There’s a lot going on but I am loving every minute and can’t wait for people to hear these songs I’ve recorded.’ – DailyMail