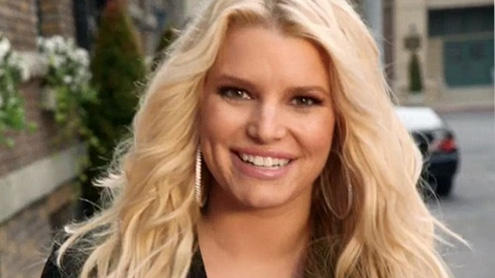 She became famous after starring with her ex-husband Nick Lachey in their MTV reality series Newlyweds: Nick and Jessica in 2003.

And Jessica Simpson is already plotting her return to the small screen in a new sitcom pilot for NBC, which will be inspired by her life.According to Deadline, the engaged 32-year-old – who’s heavily pregnant with her second child – is excited to produce and star in the single-camera, half-hour series.’I often find myself thinking that no one could ever make up the things that actually happen in my life — so between the real-life elements and a great team of writers, I think we’ll have people laughing!’ Simpson said.

Executive producers for the pilot are already dubbing Jessica a ‘modern day Lucy’ – including Nick Bakay, Ben Silverman, Jimmy Fox, and Jessica’s father/manager Joe Simpson.Silverman explained: ‘From running a fashion empire to wrangling her public image as a new mom, we see Jessica’s character approach a variety of “everyday” circumstances that will get audiences laughing out loud.’No stranger to the medium, The Dukes Of Hazzard actress has also starred in her own docuseries called The Price of Beauty as well as appearing in little sister Ashlee’s reality show.

Back in 2004, Jessica filmed a pilot called Jessica where she played a pop star-turned-TV news anchor, but ABC opted not to pick the series up.Meanwhile, the Weight Watchers spokesperson and her fiancé Eric Johnson have been holidaying with their eight-month-old daughter Maxwell in Hawaii.The Fashion Star mentor admitted she feels ‘awful’ when her work limits the amount of time she can spend with her daughter.’Motherhood is the best thing I’ve ever experienced – and the most challenging,’ Simpson told People magazine.

‘On some of the days of Fashion Star, I’m awake before Maxwell is awake, and I’m not home until she’s already back to sleep. That’s only happened about four times, but it makes the day awful.’She continued, ‘I definitely need to see my baby. I get really sad if I don’t get to see her. And then when Maxwell sees me, she just stares at me and touches my face. I can tell she missed me. That breaks my heart.’ – DailyMail