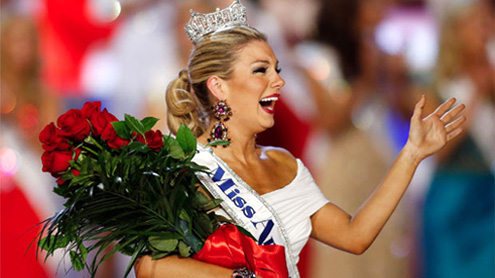 From a hometown of 26,000 people to an adopted home borough of 2.6 million, Miss America’s story includes a journey from a small town to the big city — but it doesn’t start there.

Mallory Hagan, 23, moved from Alabama to New York City as soon as she became a legal adult, and though she says she left because “I needed to find myself,” it turns out she knew who she wanted to be all along.“When Mallory was like 13 years old she was sitting on my deck and said, ‘Miss Tina, my goal is one day I’d like to grow up to be Miss America,’” said Tina Gunnels, a neighbor from Opelika, Alabama, on Sunday. “She accomplished that goal.”

Hagan took the crown Saturday night after tap dancing to a James Brown tune, deftly answering a question about gun violence in schools and raising the issue of child sexual abuse in her contestant platform.Hagan, who now resides in New York’s most-populous borough of Brooklyn, said she was sure someone else would take the top prize, even after she made it to the final two contestants.She said she was standing on the stage thinking, “They’re going to get another first runner-up photo of me.”

Her father was not nearly so modest.“We’re super excited, super exhilarated, super proud of her,” Phil Hagan said in an interview with The Associated Press backstage immediately after his daughter’s victory. “We’re not extremely surprised, either.”Mallory Hagan, however, has been competing on the pageant circuit for a decade and nearly aged out of the system without ever having won at a state or national level.

The Miss America competition accepts contestants between the ages of 17 and 24.Hagan says she moved to New York on her own at 18 years old with less than $1,000 in her pocket. She tried for the Miss New York title in 2010 and 2011 before winning last year.The transition wasn’t always easy.“The struggle was vast,” she said. “There were days when I had five bucks in my pocket. And I would push that $5” between subway fare and meal money.

But the decision was one she felt compelled to make.“I just knew that the energy of NYC was something that I really loved,” she told the AP after her victory. “I was always a little more liberal-thinking than my hometown. And I just knew that I needed to get out for a little bit, and I needed to find myself.”Hagan said it was her mother who encouraged her to address the problem of child sex abuse, which had “rippled through” her family.

Hagan’s mother, Mandy Moore, was overcome with emotion and wiped tears away as she spoke.“It’s very overwhelming,” she said. “It’s all hitting me so fast.”Hagan said she will work to make education to prevent child abuse mandatory in all 50 states.Also working against Hagan was her final question, should schools hire armed guards in the wake of the Newtown, Connecticut, shooting.

Conventional wisdom holds that contestants who receive questions about controversial topics are less likely to win. But Hagan said she didn’t panic.“I’m not sure that it came out as eloquently as I would have liked it to, but my views remain the same: It’s never OK to fight violence with violence.”With the crown, she receives a $50,000 college scholarship and a year as an instant celebrity and role model. She defeated Miss South Carolina Ali Rogers, who took second, and Miss Oklahoma Alicia Clifton, who finished third. – KahleejNews