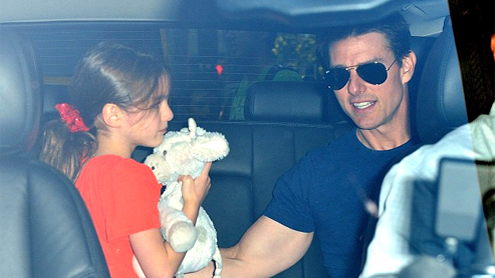 Suri Cruise is spending Thanksgiving in the UK with her father Tom Cruise.

The six-year-old has been living in New York with her mother Katie Holmes since her parents divorced earlier this year and hasn’t seen her dad since July as he has been filming All You Need Is Kill in London, but reportedly flew to the UK capital to spend the holiday with him.Suri is understood to have left New York on Tuesday to see Tom, 50.

Meanwhile, Katie, 33, who has the day off from her Broadway play Dead Accounts is in her native Ohio spending the holiday with her family.She was spotted at LaGuardia airport on Thursday morning as she prepared to board a commercial flight alone.Explaining her holiday plans recently, she said: ‘We have Thursday off, so I’m going to have a chance to go home with my family.

‘My sister makes a really good sausage stuffing and my mom makes a great turkey.’Many years ago, my dad started this tradition where we all do this run in the local park.’It’s a three mile run called the Turkey Trot. There’s even a prize, which I haven’t won yet.But it’s really fun.’Tom’s son Connor, 17, stayed on in the US and tweeted a picture of a turkey on Thursday. It is unclear where his eldest daughter Bella, 19, is spending the holiday. – Dailymail