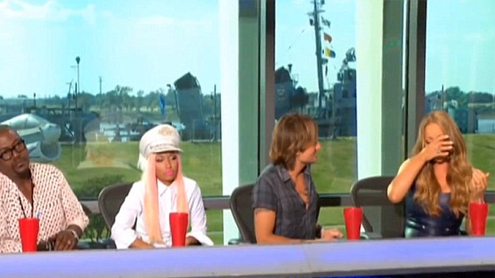 Mariah Carey can’t help getting emotional when she sees promising talent.A new TV promo for American Idol shows just that Mariah is so passionate about her new venture, she can’t help but cry when judging the contestants on the singing competition.

The Vision of Love songstress was so moved by one young man’s voice that she was reduced to tears.The diva was seen wiping her eyes after the floodgates opened – being careful not to smudge her perfect make-up.’I felt every single word you sang,’ she told the contestant in a wobbly voice.Wearing a clingy fuschia frock, Mariah, 42, is seen describing the joy she feels when she spots raw talent, later on in the promo.’I always sang, and I always wrote. It’s just about having that ambition,’ Mariah said. ‘When I see that, (I think) that person has it. You really can’t let go of your dreams.’

Mariah joins country singer Keith Urban, Nicki Minaj and returning judge Randy Jackson for the show’s 12th season, which premieres in the US on January 16.Not only is Mariah sure to make fans want to grab their hankies, her rumoured friction with 29-year-old Nicki is certain to prove entertaining as well.The flamboyant Moment for Life singer reportedly threatened to ‘knock out’ Mariah during one judging session, according to footage that found its way onto the internet in October.Mariah need not worry – she has husband Nick Cannon, 32, defending her all the way.

‘I mean, yeah, clearly you can see that they are a very intense judging panel, but obviously everybody is interested in what the show is going to be about,’ Nick said in a recent interview with Anderson Cooper.’My wife is the classiest and the strongest woman that I’ve ever met, so she’s handling it the way she is supposed to handle it.’And even Nicki admits that their feud provides a great spark to the fiery judging panel.’The chemistry of the judges, I feel it while I’m there,’ Nicki said. ‘I think it’s really different from anything we’ve seen before on Idol and people are going to like it.’