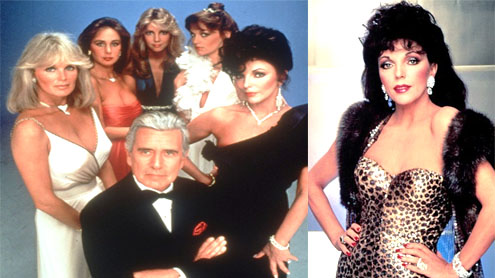 Shoulder pads and stilettos at the ready. Dynasty could be making a comeback.Joan Collins, who played the scheming Alexis Carrington in the 1980s soap, is keen to revive the show.

She said she had been inspired by the recent revival of Dallas, which has returned to TV after a 20-year break.Miss Collins, 79, said she had spoken with co-stars Pamela Sue Martin, who played her daughter Fallon, along with Jack Coleman (Steven Carrington) and John James (Jeff Colby) about the possibility of staring in a new series.‘We would be eager to do it,’ she told a US TV magazine.

‘Look at the success of Dallas.’The new version of Dallas, once again staring Larry Hagman as the villainous JR Ewing, has been one of the TV triumphs of the year.American network TNT has renewed the current series for a further 15 episodes. It is seen in Britain on Channel 5.A script for a 2013 version of Dynasty, by creator Esther Shapiro, is understood to have been shown to Hollywood executives.

The show, which starred the late John Forsyth as oil baron Blake Carrington, was set in Denver, Colorado.It was broadcast from 1981 to 1991 on the ABC network as a rival to Dallas on CBS.Miss Collins’s arrival in the show’s second series as Blake’s wicked first wife Alexis saw ratings soar.Her rivalry with Blake’s second wife Krystal, played by Linda Evans, culminated in a catfight that ended with both falling fully clothed into a swimming pool, one of the show’s best-remembered moments.

Miss Collins said the new series would open with the funeral of Blake Carrington. It is unsure which characters would return to the revamped Dynasty.Glamorous costumes, however, would no doubt be centre stage again. The outfits worn by the stars were so popular with viewers the show developed its own fashion range. – Dailymail