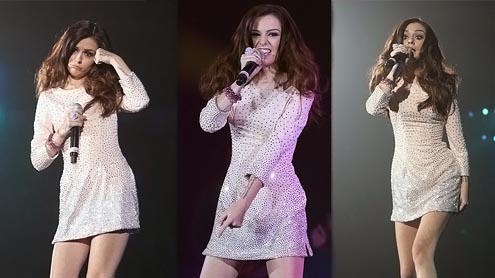 Cher Lloyd career seems to be in lift-off. The pop princess has been traveling all over the world and has now hit Japan, where she was awaited by hordes of screaming teenage fans.

Performing at a fashion event called The Girls Awards 2012 in Tokyo on Thursday, the former X Factor contestant seemed to enjoy herself as she entertained her Japanese fans.

The 19-year-old from Worcestershire seemed to have toned down Swagger Jagger look for the gig, instead opting for a girly pink dress with sequins and leaving her long brown locks in wavy hairstyle.

Cher entertained the crowd with hits such as Want U Back, and she was joined later by another teen pop sensation, Carly Rae Jepsen. The past few weeks has seen the teen star travel to Australia, New Zealand and Singapore before landing in Japan.

Cher, who was recently a guest judge on talent show Make Your Mark, has previously credited beau Craig Monk with keeping her sane and she therefore may be wise to keep her man by her side as she goes about her work Down Under.

She told the Mail Online: ‘My boyfriend keeps me sane.’ ‘He tells me to keep a grip, he’ll say “You’ve got the best thing ever, realise you are the luckiest person ever.” ‘He whips me back into shape a little bit.’ – DailyMail